The Steady Rise of Lai Lok-yi 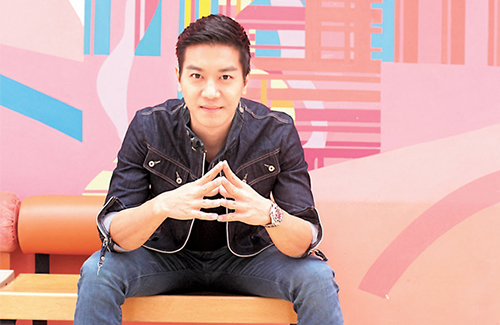 Like many of the TVB idols that debuted in his generation, Lai Lok-yi (黎諾懿) had a promising start. The media compared his looks to the late Danny Chan (陳百強), and he received a notable amount of attention for starring in 2003’s Aqua Heroes <戀愛自由式> and Hearts of Fencing <當四葉草碰上劍尖時>, the latter as the lead male role. He was also put in a promotional group with Raymond Lam (林峯), Ron Ng (吳卓羲), Sammul Chan (陳鍵鋒), Bosco Wong (黃宗澤), and Kenneth Ma (馬國明), and together became the “Olympic Six Stars.”

However, unlike his Six Stars group mates, Lok-yi’s career failed to gain traction. While the other five went on to star in multiple successful dramas and became big stars in their own right, Lok-yi remained in TVB as a mere supporting actor.

But Lok-yi, a devout Buddhist, believes that every cause brings a consequence. He’s fine with having a slower start than his peers—in fact, he prefers it. He wants to enjoy life as it comes, and prefers to have a stable, comfortable, and worthwhile career.

“I may be walking slower than others, but I’ve excelled in having a stable, comfortable [career],” said Lok-yi. “There are certain things that cannot be rushed. I do not mind achieving fame until I turn fifty.”

Sees Wayne Lai As His Target

The 36-year-old actor played supporting for years before finally hitting big with the 2012 sitcom Come Home Love <愛·回家>, which ran for over 800 episodes in addition to a spin-off series that ran for 100 more. TVB’s current sitcom, Come Home Love: Dinner at 8 <愛·回家之八時入席>, is inspired by Come Home Love’s formula.

“I really like this role of John Ma myself,” said Lok-yi, who starred in Come Home Love alongside Lau Dan (劉丹) and Tsui Wing (徐榮). “But to play the same character for many years is not healthy for an actor. I want to be able to show my diverse abilities to the audience.”

Lok-yi currently stars in the suspense drama Presumed Accidents <純熟意外>, a series about a team of insurance claim investigators. Lok-yi plays Mantus Cheuk, a character that hovers between black and white. “I believe the audience will find the role refreshing to see,” he said.

When speaking about his slow but steady rise to fame compared to his Six Stars groupmates, Lok-yi expressed, “We all have different images. Raymond Lam is a prince, Ron Ng takes on a cool guy image, while Bosco Wong has a bit of a bad boy look. As for me… allow me to walk on a steady, unassuming road. I’ve definitely chosen the harder road to walk on, but I’m happy to do it. Male actors are blessed with longer careers in the industry. Just look at Wayne Lai (黎耀祥). We all knew he was a great actor, but he just needed that one opportunity to make it big. Chai Kau turned his career around.”

Lok-yi then added that he has no interest in taking an “idol” route to success. He does not want to rely on rumors to make him famous. “I want to be newsworthy for making good dramas and for making good roles, and not for being known as that guy getting caught with a random female celebrity.”

Throughout his 13-year acting career, Lok-yi only had rumors with a few female costars, most notably with Tavia Yeung (楊怡). It was assumed that they dated for a few years before Lok-yi started his relationship with former Miss Hong Kong contestant, Nicole Lee (李潔瑩). Lai-yi and Nicole dated for three years before tying the knot in 2014.

“After all these years, people should know that I’m not exactly the party type. My close friends are people like Ekin Cheng (鄭伊健) and Yoyo Mung (蒙嘉慧), and we’re the kind of people who don’t like going out at night. We like scuba diving, badminton, and wakeboarding. The public likes to think of me as someone who is a slacker and living a stress-free life, but I just don’t want rumors to affect my ways of life.”

Thanks to Ekin, Lok-yi came to know veteran actor Sean Lau (劉青雲). Lok-yi said Sean had helped through his difficult times. “He told me that I should do what I need to do first before thinking about trying to achieve anything else. In life, we have our high and low tides. It will not stay high all the time. When we’re at our lowest point, we should settle down and think. Reflect.”

In regards to what future roles Lok-yi wants to challenge, he expressed his interest in portraying a serial killer or a disabled person. “To be able to act in a character that is completely different from your own will lead to breakthroughs in your acting.”

7 comments to The Steady Rise of Lai Lok-yi