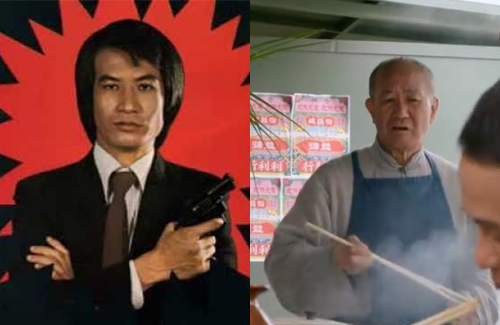 There are many well-respected, veteran green leaf actors today are still working for TVB, including The Ghetto-Fabulous Lady’s <福爾摩師奶> Forest Chan (陳狄克), who plays the owner of a beef noodle stand.

71-year-old Forest Chan may not be a leading actor, or even a big supporting actor, but every TVB drama-goer would be able to recognize his face. For 42 years, Forest Chan dominated the small screens with his supporting roles, and he’s become so recognizable on TV that he’s being dubbed as TVB’s “triad king” for his frequent portrayals of triad members.

Forest Chan, real name Chan Kwan-yung (福爾摩師奶), grew up with martial arts training. In the 1960’s, he was hired by Shaw Brothers Studio as a stuntman. In 1973, he joined the now-defunct RTV. In 1976, he starred in RTV drama The Chinese Killer <中國殺人王>, his first and only television drama in which he was the male lead.

Though The Chinese Killer was considered a success, Forest Chan did not get many leading actor opportunities after the show. Three years after joining RTV, he left Hong Kong with the late Lau Kar-leung (劉家良) to do movies in Taiwan, but returned to Hong Kong in 1978. The following year, under Steve Lee’s (李家鼎) guidance, he joined TVB. He did struggle to make ends meet throughout the years, and in between 1990 and 1995, he also worked as a taxi driver for some extra cash to support his family.