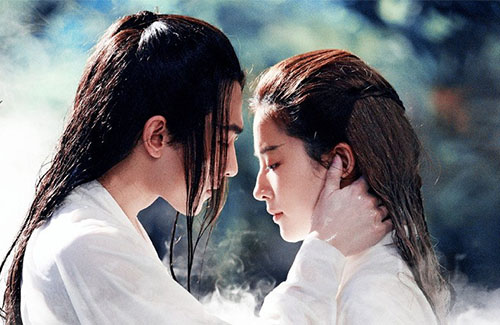 The nation is ready for the battle of the best when it comes to media adaptations for the popular xianxia novel. Comparisons are imminent.

Once Upon a Time, a full-length feature adapted from the popular xianxia novel Three Lives Three Worlds: Ten Miles of Peach Blossoms <三生三世十里桃花>, will hit cinemas in China on August 3rd, at 2:00 p.m. It was originally scheduled to premiere on July 21st.

The film stars Crystal Liu Yifei (刘亦菲) as Bai Qian, a goddess monarch who is engaged to the dragon crown prince Ye Hua, portrayed by Yang Yang (杨洋). Intrigued by her physical similarities with his deceased wife Su Su, Ye Hua lets go of his identity to discover more of Bai Qian’s relationship with Su Su.

The novel, also known by its English title To the Sky Kingdom, has also been adapted into the TV series Eternal Love, which had ended its original broadcast on March 1st, totaling 58 episodes. In the TV show, Yang Mi (杨冪) starred as Bai Qian and Mark Chao (趙又廷) starred as Ye Hua.

Once Upon a Time premieres August 3.

“Once Upon a Time” Trailer