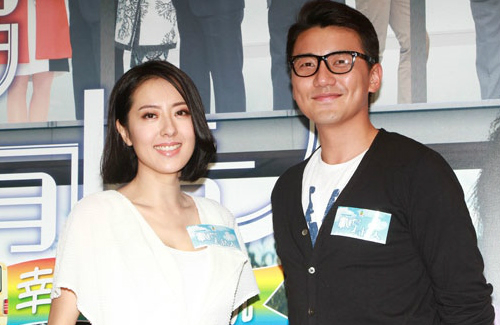 At the 2015 StarHub TVB Awards ceremony that took place in Singapore last week, Tony Hung (洪永城) and Priscilla Wong (黃翠如) were partners for the red carpet walk. When reporters backstage asked Tony if he is worried that Natalie Tong (唐詩詠) would be jealous, he joked, “Of course not, but I wonder if Priscilla regrets choosing Edwin Siu (蕭正楠) as a boyfriend! I treated her with so much love, but too bad she chose him in the end!” This statement once again ignited rumors between Tony and Priscilla, and started a commotion amongst netizens.

While filming for new TVB series Peculiar Taste <味想天開> yesterday, Tony issued a public response regarding his joke and apologized for its offensiveness. He expressed, “I said some stuff that I shouldn’t have. It was just a joke! I didn’t know it would evoke such a large response from the public.” Tony clarified that Priscilla is an amazing coworker, but there are no romantic feelings between them. “Since she is currently dating Edwin, I also want to take this opportunity to apologize to him. I congratulate them as a couple. They really suit each other!”

Tony added that he has decided to treat Priscilla and Edwin to dinner to make up for his wrongdoing. When asked if he would also invite Natalie, he replied, “I really should invite her as well. She didn’t say she was jealous, but she did ask me why I spoke without thinking again. I really have to keep my mouth shut next time!”

Reporters informed Priscilla about Tony’s decision to treat them to dinner via a telephone call. She expressed, “I think he should treat Natalie nicely, since she is probably the one who is most offended from his remarks.” On the other hand, Edwin also added, “What make-up dinner? There’s no discord between us! I’d rather him invite me to his wedding!”

7 comments to Tony Hung Apologizes for His Rude Joke