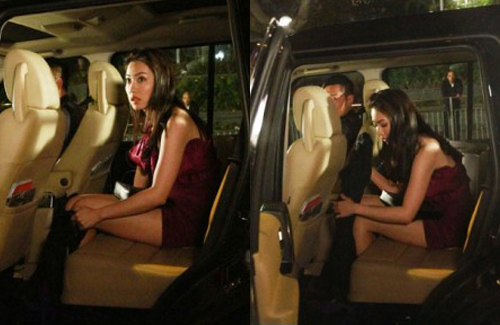 Nerves did not get in the way for Tracy Chu (朱千雪) when she dressed down for her first day of shooting for the TVB prison drama The Battle of Tomorrow <再戰明天>. Several nights ago the 25-year-old, who wore a purple cocktail dress, had to film a scene in which she had to change into her jeans in front of costar Kenny Wong (黃德斌).

Portraying correctional service officers, Tracy and Kenny received a sudden order to look for an escaped prisoner in the city in the filmed scene. For convenience, Tracy was forced to change into her pants at the backseat of Kenny’s car, revealing her thighs.

The 2012 Miss Hong Kong second runner-up said she did not feel awkward filming the scene, saying, “It’s not like I had to strip everything off.” Asked if she felt any pressure working with veteran actor Kenny, Tracy said, “It’s my first day today. At the moment, I am not under much pressure. [Kenny] is really nice.” Unafraid of developing rumors with Kenny, Tracy even added that she would occasionally be “electrified” by Kenny’s eyes.

Kenny had nothing but praises for Tracy, noting that she is a rookie with talent. He said, “She is not a ‘flower vase’. She has talent! She has beauty and wisdom!” Has Kenny taught her any camera or filming tricks for shooting dramas? Kenny responded with a laugh, “She should actually teach me how to pose.”