[TV Commentary] “The Journey of Flower” Episodes 10 to 12 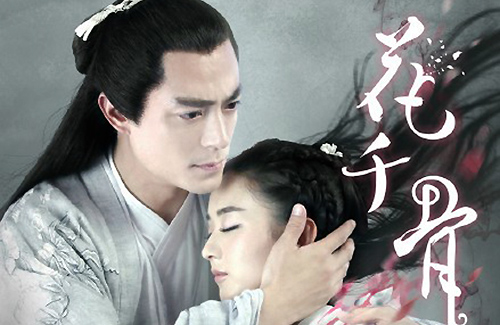 A very brief summary
In 3 episodes very little has progressed because right now I as viewer only want to know 3 things;

1. has HQG become BZH’s pupil yet?
Answer : Yes! And dramatically so. She somehow managed to survive the entire competition by beating everyone by basically having a death wish. Her winning strategy is “If I should die fighting to be Honourable Superior’s pupil,that is how I will do it”. She almost died fighting the spy sent by that blue eyed ugly dude who seems so scared of our Sha Qianmo, he basically went behind his back and did all these. And she lost to Mantian, fell into water dramatically and won by technicality; one of the rules said no killing the other or aiming to kill and Mantian was using a weapon that could have done just that.Of course HQG has Duan Nian but she told Duan Nian to “You do recognise me as your owner, but now is not the time. Leave, I need to do this alone, go, go now!”. AND most important of all, BZH wants her to win anyway. Like Mantian’s father pointed out; “So, you have already gifted her with your personal sword Duan Nian, the results are already decided eh?”

I will say sorta but then BZH could have said “Oi! She is my calamity ok! Why would I want her to win? I have a death wish too?”

I will also say yes sir, you do too.

2. has HQG fallen in love with her now sifu?
Not yet, but soon to be. She is basically fascinated with him.I mean who wouldn’t? He is boring, yeah, he lives a life of solitude, yeah, he doesn’t even eat, yeah, doubt he has even tasted the sweet lips of a woman, yeah, BUT he is very nice to her. After all the hoopla over becoming his pupil (he basically summoned her to his side by transporting her via beaming her to his side – like any science fiction movie will do), once the pupilage starts, she..

a. has music lesson
b. has to learn sword fighting by herself. Sifu is very book based in teaching as in “Here, take this book, memorise it”
c. she cooks, he doesn’t eat at first then he eats and then he promises to eat with her. Yeah I know, so educational.
d. sits around do nothing as he sits around and read or sits around and play music or stands by the edge of his house sitting on a pretty rock to view the world below him.

Basically he got a live in maid.

But he indulges here even now. He lets her have freedom to move around, in one of the cutest scene, she goes around looking for her sifu by shouting “SIFUUUUUU!!! SIFUUUUUUUUUUUUUUUUU!!! SIFUUUUUUUUUUUUUUUUUUUUUUUU!!!” and mind you that place is so very quiet. He wasn’t annoyed but rather unemotionally detachedly amused when he observed “I observe a code of silence at this place, next time don’t go around screaming” or something like that. Other than that she gets hands on music lesson which is my favourite scene of these 3 episodes simply because she isn’t learning, she is just being shy. Awwwwwwwwwwwww…..

3. has anyone died yet?
Not yet except for the emperor. No blood vomiting yet. But soon we shall have that and we shall all regret asking that question now. BUT the best ending for episode 12 will be jealous Mantian wanted to kill HQG and Tang Bao came jumping to her rescue and the last we see is Tang Bao flung mid air and falling straight at the tip of Mantian’s sword and HQG shouting “TANG BAOOOOOOO!!!!!!!!!’. Will our favourite caterpillar survive? Of course she will but this maor stress may be the reason why as a human, she became so skinny and malnourished looking. I really am not looking forward to Tang Bao the human grl. In fact why can’t Tang Bao start off as a child,chubby cute little girl? Because must jump straight to love affair with Shiyi issit? I didn’t quite like Tang Bao as first but darn it, she grew on me as she was munching on the leaves. I even like the graphic now. Can’t Tang Bao stay like this, forever?

Anyway at this point I am sure you have the same questions as I do apart from the above 3. Like..

Shouldn’t she be kicked off? And how come daddy used evil sword and yet they are still at Chang Liu? Chang Liu has no rules for kicking students out except for poor students? They’re like Hogwarts issit? You know Slytherins are up to no good and yet there they are, at Hogwarts.

How come HQG can suddenly fight so well?
Good question. Maybe it is within her but the series conveniently forgot about her past live (that goddess thing) and didn’t even try to tie up the two ends. Also I am wondering will Shou Shan sect come to her rescue when she is pierced and imprisonment and kicked aqnd humiliated and defaced and whatever? Or like now, series has conveniently forgot about that too except with the appearance of that guy with a name so confusing I’d rather not type it?

How come everything is so literal in this series?
a. BZH is above all mortals and so he stands at the top looking down, observing the mortals.
b. Sha Qianmo is lord of the demons or underworld and his place is literally a cave, dark and ugly and yet this is a man who loves beauty, dresses well and has zero expectation of his own accomodation to match his looks?

c. why bother with Meng Xuanlang’s story? What is the significance? Will there be a war between humans and deities, fairies and xians? If not, what is the significance? I read somewhere that describes HQG being loved by the Lord of the Underworld/Demon, Lord of the mortal world aka emperor, Lord of the immortals… basically she is loved for different reasons at the top (sky), middle (earth) and bottom (underground). Absolute complete love. No wonder Mantian is so angry she is willing to risk being expelled by trying to kill HQG.

d. What’s up with the bell huh? I mean the leadership’s symbol is a feather and imagine losing that,poor BZH or HQG has to chase after some chicken or goose for the feather. Then a disciple’s symbol is a bell, like a cow, you can hear the cow coming from far far away. I don’t get the symbolism of these items. And also HQG wearing Xuanlang’s gift of a dragon pendant which apparently has ZERO special powers so I wonder, what is the point? At least Duan Nian will drop by to kill someone for HQG once in a while. And how come Duan Nian suddenly listens to her? What did she do? Did she chat with the sword? Sign some contract? Did she almost died protecting the sword? Did she scream at the sword? Did BZH like told the sword “Obey her or I will melt you down”?

Let’s not even talk about the potential love tragedy between many characters in here, mainly our 2 leads. The setup is already tragic. One immortal, one isn’t, one centuries old (but not clearly stated except when HQG asked her sifu how long he has stayed in that awesome house, he replied wistfully “Too long” – so being an immortal is really not fun at all) and the other only 16 at this point of time, one is his calamity, one is her would be murderer… basically fate has it they have to cancel each other out. The ending (if sad) will affirm the notion that love doesn’t conquer all and I hate that. I simply hate it.

And then there’s the special effects which is now bearable but absolutely unnecessary at its form. Like some sabre fighting but like Xbox version (so silly) but it is now minimal because scenery is real and that you can’t take away from this series. The kung fu however is absolutely horrendous and zero imagination. If this is wuxia, you will fall asleep at the flying around and nothing much else.

Yeap, at episode 12, I am LOVING this series. I love the progression of HQG and BZH’s relationship and whilst I hate Mantian, I understand her progression as well but other characters are wasting space except for Tang Bao which we need because in all seriousness, some cuteness will balance out the tragedy except when Tang Bao dies and you and I will curse the writer. But everything else is just a waste of time. I wish the series is more intimate. Forget about everyone else. Tell me why BZH seems so miserable with his duty; is he waiting for something?Does he not want to do this? Why are the immortals all so miserable and angry? Why is Zixuan so darn insistent and acting like a jilted lover when BZH never promised her anything? And where are the other friends-immortals? Why is BZH so lonely,so alone? Who was he before he was BZH? Come on, some character development won’t die!

However I love how HQG after becoming his pupil stared at him as he sat alone and doing his stuff and she said to herself “Shifu, from this day onwards, I will be by your side. You won’t be lonely anymore, because I will be here,always”. Awwwwwwwwwwwwwwwwwwww and Zixuan did spit venom at HQG by telling BZH “You…. accepted a female disciple?” and BZH merely replied “Where I am her father figure”.Ohhhhh that is until she grows up and he likes her. Creepy BUT since BZH’s age is never fully revealed, less creepy.

And I also like how every woman who hates HQG underestimates HQG and every guy who likes her will see her in a different light. And how can they ever underestimate her? This is a girl who learned to fight in like a few days and in a matter of months improved enough to convince BZH to take her in as his only ever disciple. Ever.

As for performances thus far, you know I love Wallace Huo right? No? I love Wallace Huo.I think he is doing great. I have always liked Zhao Liying and her no nonsense approach to acting. Can’t believe she came from that worst producer’s line of graduates. I think she is doing great even if at times kinda dazed expressionless. At least Wallace is supposed to be expressionless but his eyes speaks volumes however much his pursed lips stay the same. The others are doing well too, with Li Chun impressing.

The star however is the costume. I can’t get over how beautiful they’re. I am watching Empress Of China and I find th costumes just OTT and everytime I see Meiniang, she has more and more incredibly high sort of hair,like some insider’s joke. In this series, the hair is all just beautiful and practical and possible.

And yes, I love Tang Bao. So cute. I can look past the effects but I however absolutely hate the kung fu and some dubbing.

As for the climax of episode 12, just 2 more days to the next episode finding out the fate of someone we already know but still… what does it take to kick Mantian out of Chang Liu?