[TV Commentary] “The Journey of Flower” Episodes 17 to 18 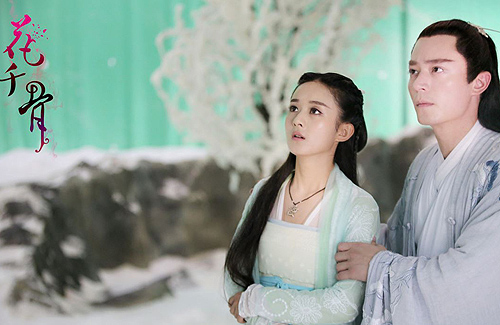 If you become a bad person, I won’t be your friend anymore. So Dongfang, promise me never be a bad person – Hua Qiangu

Miss Ni, why, why you still hate her?

NMT : Humiliate her! I pitted her against Zixuan about scents, to prove that she is no good at everything and to show BZH how wrong he was to take her on as his only disciple.

Miss Ni, you do understand the word ONLY, so if she isn’t his disciple, there won’t be another?

NMT: NO! I REFUSE TO BELIEVE THAT! *HUFF AND PUFF AND GLARE SIDEWAYS*

Miss Ni, did you win?

Okay…. that was quite an interview. Up next, oh Miss Zixuan, looking lovely today, same dress, hairstyle and oh nostrils is flaring.

Miss Zixuan, so…how do you feel..

Miss Zixuan, why, why you still hate her?

ZX : Show BZH what a faker she is! I took the challenge on scents and I couldn’t figure out the final 2 ingredients she used and guess what? It was her own scent and BZH’s scent trapped in a scent bag for 100 days! Imagine that! That little faker placed that bag next to him! She dares to fall for her shifu! No moral! No conscience! I will show BZH how wrong he was to take that little thing as his only disciple who will ruin him!!!!!!!

Miss Zixuan, you do understand it is infinitely impossible not to fall in love with BZH who is like this super hot young sifu right? I mean that man is a looker, he can fight, he even baths even if he doesn’t eat or sleep or one presume do bodily function stuff and he is also sorta nice and fair and reasonable. I mean dear heavens, he is the hottest xian before deity was in fashion. Can you blame poor Xiaogu who is into father figures and hero worshipping? I mean look at you! Didn’t you like go through some praying ceremony to be his like err sister or something? Isn’t that sorta incest?

ZX: NO! I REFUSE TO BELIEVE THAT! *HUFF AND PUFF AND GLARE STRAIGHT AT CAMERA*

Miss Zixuan, so you think BZH is convinced? That HQG is a faker?

These 2 have just formed a Hate Fate Club.

Yeah I know, kinda repetition isn’t it? But what to do? Blame HQG for being so loved (but no worries, later these 2 will be happy to know at the worst of time no one else help her) and BZH for being so handsome (BZH should do everyone a favour and scratch his own face ugly and if ZX still is stalker with him, next best alternative, get a big dragon pronto! I heard Khaleesi is renting out one of her dragons, will take a few months to reach Chang Liu but hey, this story spans like 30 years, still got time).

And next is Meng Xuanlang. Wanna hear what he has to say?

Oh next in line, Qingshui!!

OKOKOK we get it, I get it, everyone gets it. All one way street love and the only 2 way is yet to come.

Some progression is HQG finally realised she is falling in love with her shifu. So much so she dreads going into the 3 coloured pond thing which by the way she passed by suppressing her pain using her inner qi together with that errr Shuofeng (I hope I got his name right). Everybody else failed for various reason. Credit to NMT, she failed for ambition. If you should fail in anything, let it be having too much ambition eh? Well ZX was helpful by informing BZH about HQG failing the test and BZH looked pissed at ZX for spreading gossip. Seriously, ZX may have helped BZH to deal with his own feelings inadvertently. Anyway, typical of him to gently confront HQG, looking kinda smug-ish and HQG guiltily admitted;

Yes shifu, I have fallen in love, I know I shouldn’t have, I should suppress it but I can’t help it. I’ve fallen for … Dongfang

And I swear shifu’s face was like huge crash down to earth! He looked shocked, as shocked as he can look which isn’t much but is pretty much for him. Now before you think shifu is in love with HQG, take that thought away. He is just surprised it has to be Dongfang because he doesn’t like Dongfang. He thinks Dongfang is hiding something, he doesn’t trust Dongfang, hence the reaction. Anyway he forgives her etc etc etc.

HQG promised to stay away from her shifu, starting with no dinner together and this time shifu looks kinda hurt, as hurt as he can muster which isn’t much but you can hear the tear in his heart. Still, not love yet. Dongfang visits HQG at Changliu on an official visit and HQG told shifu she likes to stay with Dongfang a few days and she left and finally, alone in his huge beautiful room, table no dinner, no one to scream SHIFUUUUUUUUUUUUUUUUUUU and have his own private one girl fan club, suddenly the place felt… quiet, lonely, alone. Love? NOT YET! But a stirring in his heart, for 300 years or so he was mostly alone in his alone space and then last few years or months it was invaded by his personal calamity star and suddenly, he must have felt “DAMN THAT DONGFANG” or maybe in his more elegant eloquent self, “Ser Dongfang, your presence has caused me much grief”.

And finally some other stuff.

ZX tells NMT to investigate everything about HQG so that… you know why. Crazy woman. Can’t she just accept BZH will romance and break every man woman and beast in all realms and he won’t lay one manicured finger on her? Is it so hard to accept?

NMT vows to hurt HQG and yet not kill her but you know, get rid of her. Hopeless case.

MXL neglects his own dynasty and empire because he never wants to emperor anyway. One day he shall grow up, grow old and die and we shall be rid of him. Until then, bear with me shall we? We suffer together.

Dongfang is the only adult here that is openly emotional in ways he can be and yet he wonders will HQG forgive him if she only know he has used her to get to his destination which is… what was it again? I forgot. I think Dongfang also forgot.

SQM and BZH fight at the start lasted until BZH sorta sabre light cut SQM’s hair and SQM refused to fight close. Instead, he proposed a tug war; aka use a bronze cauldron and push at each, and the one space it lands on, that person losses. And I was like thinking, all the power, 2 greatest fighter on the land, so much light sabre effects and in the end it boiled down to… pushing cauldron? Did I tell you the kung fu is the worst aspect of this series? Absolutely unimaginative. Anyway SQM lost and from thereon I don’t see HQG crying SHA JIE JIE!!!!!! You know HQG can stop giving shit about anything, like she can totally throw the sword sheath onto the floor like *klangggggggggg* hard and not care in her own way. Cold.

And that’s it. Next 2 episodes is probably Operation Discredit HQG. Sigh… Hate Fate Club will never win and hopefully it won’t grow more than 2 members.

Anyway for this episode some weird things must be pointed out.

2. You will never realise this series was shot during the hottest months in China and was about 40 degrees celcius per average and it took me that many episode to realise why the real scenery looks great like the sky so blue because it is darn hot. All the actors had extra powder one, closeups you can see sweat on the foreheard top. It shocked me to see Wallace looking so pale; And he has to wear many layers. They should make it mandatory to film in winter but then you won’t have beautiful blue skies. Now you know why everyone looks extra shiny in their faces.

3. Weird dance sequence by HQG. Was it meant to be playful? It wasn’t. Sexy? Awkward! Or to release perfume one must dance? So … can I see BZH do the dancing please?

4. No one respects BZH. I mean everyone insults Changliu in this series. They’re not afraid of Changliu. And frankly SQM isn’t that monster of an enemy anyway. It still feels like Helm’s Deep rather than Gondor.

5. The twins with most confusing names. Anyway I already knew the guy now at Shou Shan is actually the evil twin so what happened back in the fight? I thought he can’t kill nice twin without hurting himself?

However acting wise, no complaints whatsoever. The success of this series is how wonderful the cast was. If this ends well, this can be Wallace’s best performance todate. He was controlled, still, absolutely pitch perfect as BZH and also very beautiful. Who can be BZH? No one but him. And he is King of HDTV, even is that pale face scared me a bit. Zhaoliying is quite simply wonderful as the super cute HQG. Like Wallace said in an interview, Zhao Liying’s cuteness didn’t feel put on. It felt natural and you kinda cheer for her. She ain’t Mary Sue but she is nice. In one scene she said to her shifu that she had 3 dreams where 1st she was a stone who wants to become better and so in 2nd dream I forgot what she became and in the 3rd she became the sun but the sun is so lonely, so alone up there. However HQG being HQG understood she may rather be the stone, but being the sun has its happiness; at least she can observe her loved ones from far above, and bath them in her warmth. That’s the sort of person HQG is. It takes good writing and even more an actress capable of bringing out those qualities and Zhao Liying impresses.

I will bet if this was a Tangren production, Liu Shishi will be HQG and I bet I will end up hating HQG as much as I hate Ruoxi in BBJX.

Seriously though, I love Wallace as BZH. I can write why, I can pinpoint and justify and explain but I will just say watch it for yourself. Don’t mistake stony faced as unemotional. This time he got it right with that eyes of his. Give him another 5 years, he will be those CCTV actors who can show so much emotion by a simple flick of his eyelid without ever moving one inch of his face. His only impediment is no CCTV actor has any right to be so beautiful to look at. Years passed and here he is, just very recently… I don’t want to meet him in real life because I will be dazzled by his beauty and shocked by his thinness. Let me just observe him from afar. What a beautiful man.