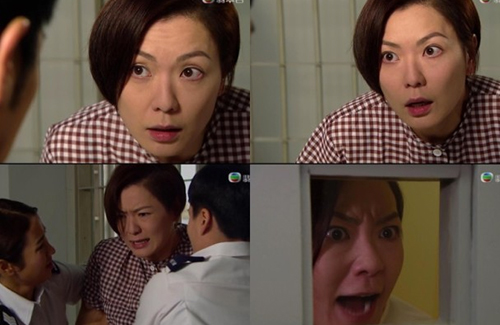 Kristal Tin (田蕊妮) got super crazy and the netizens loved it.

In one of the final moments of the series, Kristal’s character Cal Jeh attempts to convince Kevin’s character, Man Sir, that she is actually faking her mental instability and should be discharged from the psychiatric hospital. She rationalizes that she should be integrated back to society, which can fix her mental state. When Kevin denies her request, Kristal goes crazy and bites his arm. Hospital employees pull her back into her prison, where she is to spend for the rest of her life.

Netizens gave Kristal two thumbs up for her performance as Cal Jeh, and that her descent to madness was convincing and well-layered. Some have compared Cal Jeh’s character to Roger Kwok’s (郭晉安) famous portrayal of Tong Lap-yin in the 2008 television drama Last One Standing <與敵同行>, which was also produced by Amy Wong and starred Kevin.

“Everyone cried like crazy on this show,” said Kristal, during a dinner gathering with the cast to watch the finale. “It wasn’t an easy drama to do, but seeing the results, I think it’s worth it!”

Viewership points for Destination Nowhere hovered between the low to mid-20’s range, indicating only average ratings performance. Its dark source material also did not seem to be attracting TVB’s main consumers—the housewives. Nonetheless, the drama did receive widespread praise among the online community, and Kristal is definitely aware of the support.

“We’ve received a lot of good responses, and that is definitely encouraging,” said Kristal. “It isn’t everyday that you get to come across a script like Destination Nowhere. I’m so happy that I got to be a part of it!”