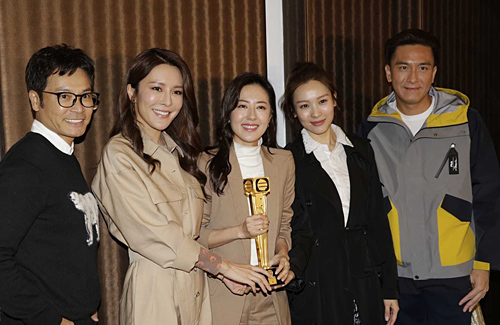 The cast and crew of Big White Duel <白色強人> got together to celebrate the drama’s success in winning Best Drama at the 2019 TVB Anniversary Awards. As Kenneth Ma (馬國明) won Best Actor for his role in the drama, he stepped up to pay for the banquet dinner. Not wanting the momentum to end, TVB executive Catherine Tsang (曾勵珍) announced at the banquet that the popular drama will follow up with a sequel.

New TVB King Kenneth took the opportunity to thank his colleagues, “There aren’t a lot of people so I can treat them. Let Roger Kwok (郭晉安) pay for the bigger banquet. Everyone worked hard; it’s right to reward them. Today Catherine announced the good news that there will be a sequel. I’m really happy.”

According to Kenneth, filming will start at the end of the year and the plot will continue with the original cast while adding some new characters. Kenneth added, “The drama was successful because the research was done thoroughly. The sequel will need more time to prepare. It needs a good script before filming so we won’t have any regrets.”

While Kenneth is reprising his role in the drama, he does not feel any pressure due to the original series’ success. “No pressure. I just need to do my best. It’s like soccer; just because this year was a good season doesn’t mean that the next season will be as good. I need to continue to do my best. I hope the audience will like and support it. “

Catching up with Kelly Cheung

As one of the stars of the drama,  Kelly Cheung (張曦雯)  was seen having a good time at the banquet. With the Luna New Year celebrations coming up, Kelly will be taking a break even though she prefers to work. “My parents are not in Hong Kong, and I don’t have any relatives here. I will have dinner with my grandma.”

Kelly shared that she had already brought her boyfriend to meet her family, “My mom and dad are very important to me, but they didn’t really say anything about passing their approvals. The most important thing is to get along, and they get along with my boyfriend.”