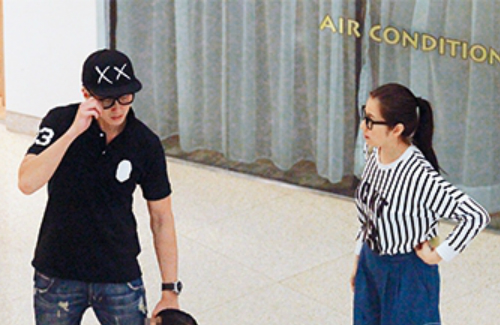 At around 9:00p.m. that evening, Vincent, Yoyo, and their daughter entered an Italian restaurant, Amaroni’s Little Italy. Although it was past rush hour, the family chose to sit in a corner. While dining on lobster risotto and lamb chops, the couple was deeply engaged in a conversation, and Yoyo was seen laughing loudly once in a while. Vincent also busied himself by feeding his daughter in between bites of food.

However, the couple’s mood seemed to have shifted drastically as they left the restaurant one and a half hours later. After exiting the place, Yoyo suddenly placed her hands on her hips and said something to Vincent, who appeared to be quite stunned. His face darkened before Yoyo finished what she was saying, and he took his daughter’s hand while briskly walking away. Yoyo then followed behind them from a distance.

After the birth of their daughter in 2012, Yoyo was reportedly her main caregiver as Vincent busied himself with non-stop filming at TVB. Tabloids speculated that he often did not care about the situation back home and lacked communication with his wife. Thus, the couple reportedly had several arguments over the matter.

Reports further claimed that Vincent and Yoyo’s marriage officially hit a bump at the beginning of this year when Vincent was rumored with Jacqueline Wong (黃心穎) while filming With or Without You <東坡家事>. The rumors intensified as Jacqueline frequently uploaded photos of her and Vincent on Weibo. Yoyo was allegedly so enraged that she slept in separate rooms with her husband.

TAGS: Brick Slaves, Jacqueline Wong, Vincent Wong, With or Without You, Yoyo Chen