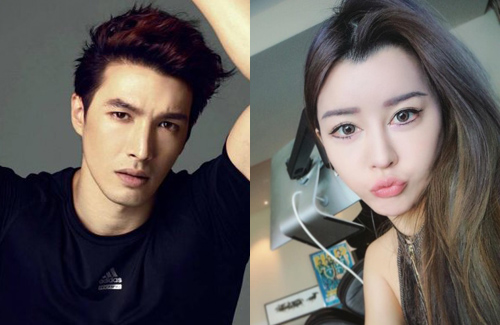 After dating for six years, Jolin Tsai (蔡依林) announced her breakup with actor and model, Vivian Dawson (錦榮) in November 2016. Despite the less-than-amicable split, Jolin confidently reassured that she is well. It seems as though Jolin is not the only one who has let go; Vivian has also reportedly moved on, as the 32-year-old hunk was recently spotted out on a date with Miko Bai (白緯芬), who is a member of the Singaporean girl group, BY2.

Although he wore a black vest and a face mask, fans were quick to recognize Vivian at the convenience store. Sitting beside him was Miko in a matching black top. The duo was seen chatting, enjoying a casual meal, and exchanging information on their cellphones.

When reached for comments, Vivian’s manager responded on his behalf, clarifying that Vivian is still currently single and focusing on work. They know each other and conveniently ran into one another at the gym, before deciding to grab a quick bite together. Miko’s management company has also responded and explained that the pair were merely friends.