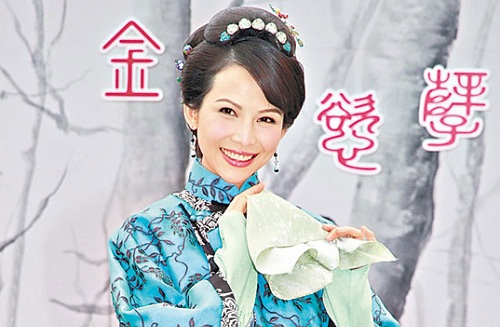 Sheren Tang (鄧萃雯), Ada Choi (蔡少芬), Moses Chan (陳豪), Christine Ng (伍詠薇), Alice Chan (陳煒), Kenny Wong (黃德斌), and Vin Choi (蔡淇俊) attended the costume fitting of TVB heavyweight drama, War and Beauty 2 <金枝慾孽2>. At an earlier TVB sales presentation, a video clip of War and Beauty 2 featured a kissing scene between Sheren Tang and Ada Choi. Shortly after, Sheren professed that due to her Christian faith, she was unable to accept a script focusing on same-sex relationships, a comment which sparked angry criticism that Sheren was a hypocrite from the online community! Asked by the press whether she will resist filming lesbian topics, Sheren impatiently told the reporters not to ask such questions. Also a Christian, Ada generously stated that if such scenes would add to the full-fleshed development of the character, she was able to accept the arrangement.

In War and Beauty 2, Sheren will resume her popular role of “Yu Fei” from the first installment. Asked whether the lesbian scenes have been removed from War and Beauty 2 due to Sheren’s rejection of such topics, Sheren responded impatiently, “Please do not ask such questions! It appears that such scenes have been removed from the script. Without such scenes, you still persist in asking! Actors are quite passive. These questions should be addressed to the producer and creative development staff!”

On the other hand, Ada responded calmly, “Actors are faithful to the script. Right now, I am uncertain about the details, as we only find out about the script details last minute.” (Will you resist [lesbian] scenes]?) “Actors are actors; the television broadcasting standards will be restrictive anyway. The most important thing is the topic. As long as it passes my personal standard and is moral, then it is okay.” Ada appreciated the Christian decision and admitted that she had responsibility as an actress. She will not act in ghost movies, while acknowledging that she has portrayed a lesbian character in the past.

In War and Beauty 2, Ada Choi and Tracy Ip (葉翠翠) will portray nannies in the palace. Ada laughed and said she will not need to do any milk feedings in the drama. Producer Jonathan Chik (戚其義) denied that Sheren had changed the script, stating, “It is not related, but the handling of the [lesbian] topic is very difficult.” (Is there an artist who is refusing to film such scenes?) “No.”

In War and Beauty 2, Moses Chan will portray an opera singer. At the costume fitting yesterday, Moses sang a few lines of Chinese opera. Asked whether he sang opera to his girlfriend, Aimee Chan (陳茵媺), Moses said with a smile, “You are the first ones to hear me sing opera!”

Cast member, Vin Choi responded to the media’s concern regarding his father’s earlier head-bashing incident.  Vin indicated that the police investigation was ongoing. Since a portion of his father’s brain was injured, his father suffered memory loss. However, Mr. Choi’s recovery was better than expected.

It was rumored earlier that War and Beauty 2 will be Producer Chik and scriptwriter, Zhou Xuming’s (周旭明) last collaboration together at TVB. Allegedly, the pair planned to leave TVB after completing the drama. At the costume fitting, the pair denied the allegations that War and Beauty 2 will be their last collaboration together. Producer Chik indicated that the cast and crew will shoot on location in Beijing in June. Jayne: The cast is not as attractive as the original War and Beauty 2, especially the male cast, which will feature only Moses and Kenny Wong.