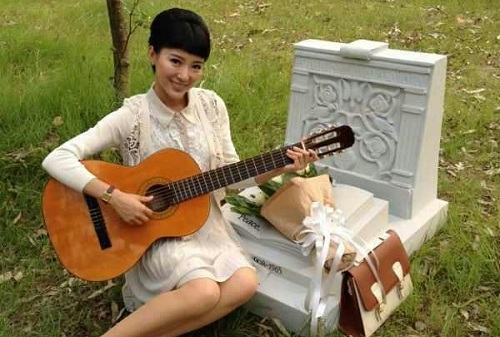 Wayne Lai (黎耀祥) , Sire Ma (馬賽) and Edwin Siu (蕭正楠) were filming at Clear Water Bay, Hong Kong for TVB new drama, Detective Columbo<神探高倫布> two days ago. The trio was having a difficult time filming at a rundown brewery in terribly hot weather, enduring even mosquito bites. The filming conditions were so harsh that Wayne even forbade his wife and son from visiting him at the set.

Wearing a thick trench coat and a wig, Wayne was sweating profusely and had to keep wiping off his sweat throughout the filming. At one point, he could not bear the heat anymore and used a mini fan to cool himself.

Wayne was filming a scene in which he played a prank on Sire and caused her to trip on a wooden plank. Sire yelled out in pain when her leg started to bleed. The blood-and-bruises makeup looked so real that one would wonder if Sire had truly injured herself!

Sire revealed that the working environment was very harsh. Recalling an earlier scene where she needed to film in a forest, Sire said that she dared not complain about the tedious work to anyone. She ended up weeping secretly to let out her frustration. Luckily, her mother would brew herbal soup to keep her healthy.

Describing his prank scene with Sire, Wayne also had praises for his costar, “We were filming a scene in which I played a trick on Sire Ma to make her suffer because she was always thinking of claiming credit. I will still save her at the end of the day, and will hold her to walk. In the next scene, our relationship has improved and she will start to respect me. Sire is a very smart girl. She is intelligent and is willing to learn.”

Sire also revealed earlier that she will be taking a vacation to the United States at later time. While there, Sire intends to enroll in an acting class to improve her skills.