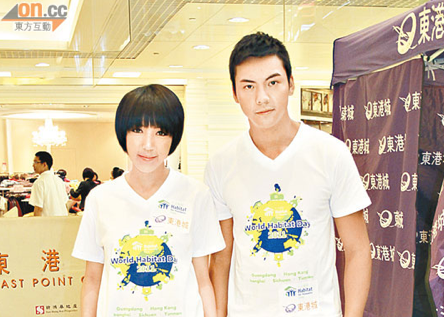 Yesterday, William Chan (陳偉霆) and Sherman Chung (鍾舒漫) appeared at a promotional event. William revealed that he had participated in a charitable project to help construct homes for people in need of shelter. William noted, “Visiting Hunan, China, I felt a deep sense of empathy. I also cooked for the other volunteers for the first time.”

Asked whether he will cook dinner for Charlene in celebrating her birthday, William said, “I am now capable of cooking for a crowd of over 50 people! If everyone is brave enough to try my cooking, I don’t mind!”

At a promotional event in Shanghai yesterday, Charlene praised William in being very mature, including help her resolve problems. William said graciously, “We are just capable of discussing the matters together.” (What matters will William seek advice from Charlene over?) “Usually in reading a script; she is a very experienced actress.” (You rehearse scenes with her?) “When we are together, I cannot immerse into the script. It’s a bit odd to ask a friend to rehearse a script together. I prefer to treasure the time together and talk about work less.” Jayne: William and Charlene are an eternally youthful couple. It’s nice to hear that William has a mature side in being able to discuss problems together.