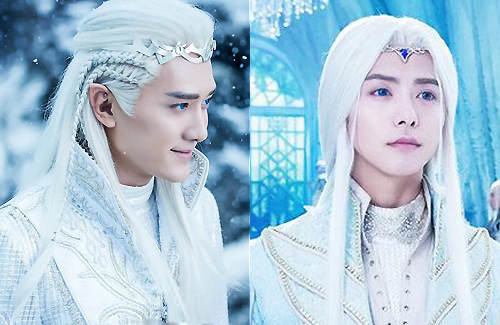 Based on the novel City of Fantasy <幻城>, written by Guo Jingming (郭敬明), the drama Ice Fantasy tells of the ice kingdom prince Ka Suo (William Feng), his forbidden love with a civilian named Li Luo (Victoria Song), and his tribe’s ongoing rivalry with the fire kingdom. Guo Jingming also serves as the drama’s artistic director.

The first video showcases mainland Chinese actor Ma Tianyu (馬天宇) as Ying Kongshi, Ka Suo’s younger half-brother who suddenly goes missing in the drama. Fans joked that the video was not a clip about Ice Fantasy but rather a promotional film about Ma Tianyu’s good looks. The video ends with Ying Kongshi stating, “Brother, I will definitely achieve the promise I gave you – to grant your freedom.”

Mainland Chinese actress Zhang Meng (張萌) takes center stage in the next video, which is about the fierce warrior princess Yan Da, who belongs to the fire kingdom. Yan Da’s quote shows off her competitive streak and desire to win: “In the fire kingdom, there is no good or bad, only winners who take it all.”

The third and final videos feature Uyghur actress Madina Memet (麥迪娜) as mermaid princess Lan Shang, who falls in love with Ka Suo, and South Korean actress Kim Hee Sun as Lian Ji, the mother of Ying Kongshi. In their respective videos, Lan Shang happily proclaims, “Not only will I win tomorrow, I will win with beauty!” while Lian Ji says, “To become a king, there must be blood.”

Ice Fantasy is helmed by veteran Hong Kong director Kok Leung Kuk (鞠覺亮), while screenwriting duties are in the hands of Shen Zhining (沈芷凝), who also wrote the screenplays for Yunge from the Desert <大漢情緣之雲中歌>, Beauty without Tears <美人無淚>, and Curse of the Royal Harem <萬凰之王>.