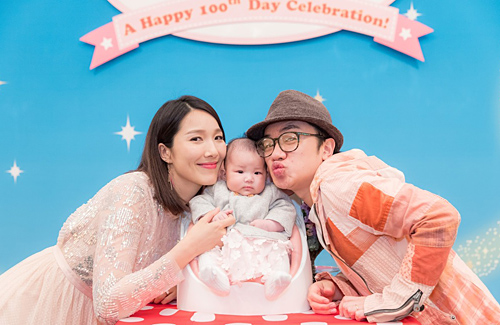 The actor digitally reunited his late father and daughter Gabriel in a self-made video clip.

Becoming a parent has made Wong Cho Lam (王祖藍) more able to comprehend the debt of gratitude he owed to his father. Sharing his sentiments, the artiste filmed a touching video clip in which he imagined his father’s teachings being passed down to his newborn daughter.

Digital Reunion of Grandpa and Granddaughter

On Qingming, a traditional Chinese festival for paying respects to one’s ancestors, Wong Cho Lam (王祖藍) uploaded a self-made clip to social media. As a newly minted father to his daughter Gabrielle, he felt sentimental about the debt of gratitude he owes to his father, writing that “Thinking of her, I thought of you; looking at her, I saw you….”

The self-made video had his old song “Re-enactment”<活現> playing in the background, which had been composed and produced by John Laudon with lyrics penned by Cho Lam himself. Through the moving lyrics, he “informed” his late father about the birth of his first child. He also digitally reunited the elder Wong with Gabriel by putting their photos side by side in the clip, and wrote that his father’s beauty lived on in her.

Cho Lam had shared a close relationship with his dad, who passed away in 2016 from cancer. The artiste had once revealed in an interview that his father had suffered digestive problems when he was ill, and would feel unwell and vomit when he tried to take in anything other than liquid food. While he had craved for the local snack of curry fish balls before his passing, Cho Lam and his sister did not agree as they were worried that his body could not handle it.

After his demise, he felt pangs of regret as he reflected on their decision then. Surmising a lesson learned about love, he said, “Loving someone is not about protecting them, but to let them do what they like, instead of what you wished they would do.”

How’re you doing? Did you know
The baby has been born.
She hasn’t grown teeth
but has a little hair,
not yet knowing how to speak,
Though you are not by her side
she has your gorgeous eyes.
Though far off in the heavens,
Your beauty lives on in her.
Your handsome looks we do not see,
Yet she lives on in your gentleness.
That familiar smiling face
is right before us
Still only a child,
She knows
You are the best,
and will understand
Your guidance from that day,
Never forgetting.
You’re not by her side
but she hears your gentle voice.

Although far off in the heavens
Your beauty lives on in her,
Your handsome looks we do not see
Yet she lives on in your gentleness.
That familiar smiling face
is right before us.
How’re you doing? Did you know
The baby has been born.

The actor had also won over his wife Leanne Li (李亞男) by using music and his sincerity to move her, through a love song called “A Fallen Angel on Earth” <跌落凡間的天使> with lyrics he had personally written.