Wong He Almost Died From a Lightning Strike 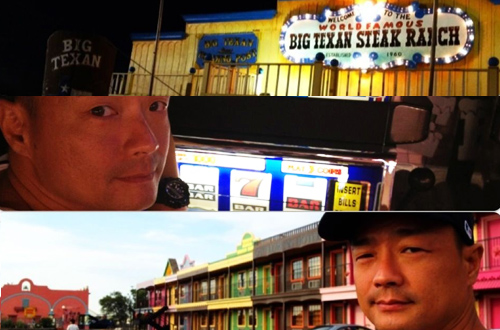 Former TVB actor Wong He (王喜) had a radio interview with Media Broadcast Corporation yesterday. He revealed that he recently returned to Hong Kong from the United States after filming a storm chasing travelogue for Ricky Wong’s (王維基) new television station, CTI. Wong He said the travelogue will be broadcast during the television station’s opening ceremony.

In the radio interview, Wong He briefly spoke about his storm chasing experience. He revealed that he and his crew frantically passed through 12 states in 9 days. Among the states they passed through were Texas, Minnesota, and South Dakota. The crew also stayed in Aurora, Colorado a few days before the infamous Batman shooting, in which 12 people were shot in a July 20th screening of The Dark Knight Rises.

Wong He also revealed that the crew almost died from a lightning strike. He laughed and excitedly said, “I suddenly saw a bright light behind the car, and it turns out that a lightning striked right between our cars! All of our cell phones immediately stopped working!” He added jokingly, “Thank goodness I haven’t done any ill-natured acts! If so, I think I would have gotten hit!”

Before Wong He signed on to film the storm chasing travelogue, CTI’s Ricky Wong had already bought him over $1 million HKD of insurance. Ricky’s generosity and sincerity prompted Wong He to immediately sign with the company. Wong He expressed that he is very satisfied with his current work schedule, and added that he will lead a group tour to volunteer organizations in Nepal and Tibet next month. 22 comments to Wong He Almost Died From a Lightning Strike