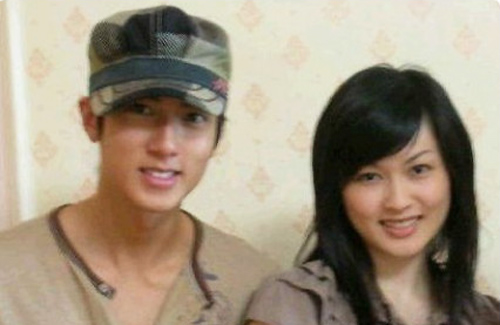 Above: Wu Chun and his wife, Lin Li Ying.

Former Fahrenheit idol, Wu Chun (吳尊), announced yesterday that his son has been born. Unable to conceal his happiness, the 34-year-old seemed relieved that he no longer has to keep his identity as a father a secret. The announcement of his son’s birth came only after two weeks since the shocking revelation of Wu Chun’s secret marital and fatherhood status.

On October 1, Wu Chun held a press conference in Taiwan to promote his new book Ignite Courage <決定勇敢>. At the same time, he spoke about his marriage as well as his daughter, Nei Nei, who was born in 2010, a year after he married his childhood sweetheart, Lin Li Ying (林麗瑩). Wu Chun admitted that he had deliberately hid his marital status from the public to respect his wife’s wishes. He also revealed that Li Ying is expecting their second child and is due anytime soon.

Now that the public has accepted he is a husband and a father, Wu Chun has no qualms in sharing his newfound happiness with his fans. He posted yesterday morning, “Da Chun would like to share a life experience with everyone. Xiao Chun has come to the world.”

Even though he initially tried to keep his son’s birth date a secret to avoid fortune teller’s unnecessary speculations, Wu Chun later confirmed through his management agency that his son was born on Friday, October 11, and shares the same birthday as his wife. Coincidentally, Wu Chun also shares the same birthday as his daughter. Xiao Chun weighed 7.2 pounds at birth and is a healthy baby boy.