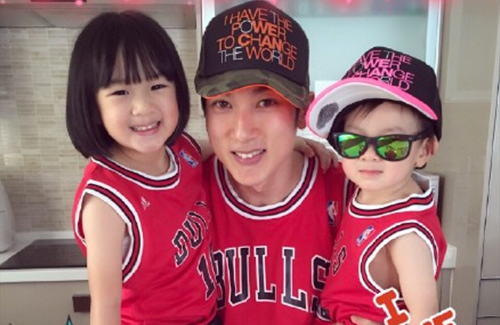 June 21, Father’s Day, was a happy day for Wu Chun (吳尊), who celebrated the special day with his 6-year-old daughter Neinei and 2-year-old son Max.

“This is the happiness I chose,” wrote Wu Chun on his Weibo. “To all the fathers in the world, let’s add oil together! Happy Father’s Day!” He uploaded three photos of himself with his two children, eldest daughter Neinei and son Max. This marks the first appearance of Max, who was born in October 2013.

On the pictures, Wu Chun, Neinei, and Max were wearing the same red Chicago Bulls jerseys. Wu Chun and Max wore snapbacks that read “I have the power to change the world.” Neinei gave Wu Chun her own self-written Father’s Day card, which read, “I love you! Happy Father’s Day!”

Wu Chun leads a very private life and rarely shares photos of his family. Though he has been married since 2009, the Bruneian actor did not reveal his marriage and family to the public until 2013.

The former Fahrenheit (飛輪海) member received numerous blessings on Weibo. Fans commented on Neinei and Max’s pretty looks, “Can he not be so handsome?” Another fan jealously wrote, “Your wife saved the Milky Way in her previous life!”