Xu Kai (许凯) is perhaps best known for his performances in Story of Yanxi Palace <延禧攻略> and The Legends <招摇>, but his new show is also building up the hype.

Teaming up with his The Legends costar Bai Lu (白鹿), the period drama Arsenal Military Academy <烈火军校> stars Xu Kai as Gu Yanzhen, an immature and narcissistic military cadet who enjoys bullying his classmate Xie Xiang, portrayed by Bai Lu, whom he later learns to be a woman disguised as a man. 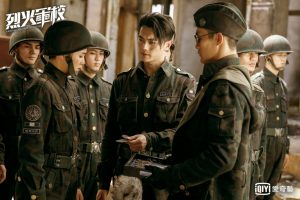 Gu Yanzhen, despite his immature ways, is very loyal and protective towards Xie Xiang. To win her heart, Gu Yanzhen would do anything to catch her attention, such as playing music, setting off fireworks, and professing his love for her in front of the entire academy. His fans find Xu Kai’s look on the show to be extremely attractive, but the 24-year-old revealed that he would have to lose more weight if he were to surpass his appearance in Arsenal.

“I currently weigh about 150 jin (about 165 lbs),” he shared. “Even my staff is telling me that I should stop appearing in public too much. They don’t want Gu Yanzhen to lose fans.”

Asking if Xu Kai himself is afraid of losing fans, he confidently said, “No. I do check comments from my fans and while I am thankful for their support, I won’t be offended if they leave. They’re all still young. Perfect time for dating. Should try out liking different people.”

Mentioning that Arsenal is his second collaboration with Bai Lu, does Xu Kai want to work with any other actress? The young actor turned shy and said, “I really want to work with my idol, Gong Li (巩俐). I’ve liked her since I was a kid.”