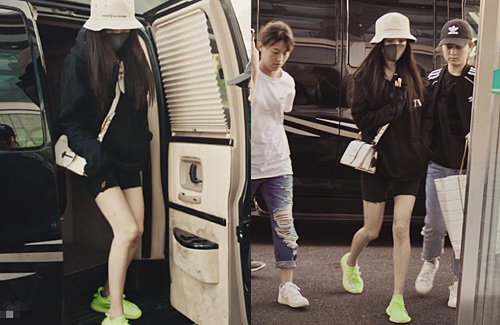 Last December, Hawick Lau (劉愷威) and Yang Mi (楊冪) announced their decision to end their four-year marriage. Even though their relationship ended in divorce, Hawick and Yang Mi agreed to share custody of their five-year-old daughter, “Little Sticky Rice”, who resides with Hawick’s parents in Hong Kong. Since “Little Sticky Rice” has been living with grandparents since she was a toddler, the divorce did not have a significant impact on her.

Recently, Yang Mi was spotted arriving at the Hong Kong airport dressed in all black. Yang Mi flew to Hong Kong to celebrate Little Sticky Rice’s fifth birthday. Though Yang Mi wore a cap and mask to maintain a low profile, many fans were able to spot her regardless. Before moving to the VIP section of the airport, she gracefully greeted her fans before reuniting with her daughter.

Hawick and Yang Mi hosted a lavish l birthday party for their daughter and even invited other second generation celebrities including Jordan Chan’s (陳小春) son, Jasper. As well, both Hawick and Yang Mi’s parents attended the celebration. In honor of his granddaughter’s birthday, Yang Mi’s father even posted a photo of him and Jasper from the party on his social media account with the caption “I heard that both kids are very expressive, and it’s probably because they grew up a little naughty. Haha. Happy Children’s Day, my beautiful granddaughter. You will always be our princess.”