It’s no secret that Yang Mi‘s (楊冪) fame has been increasing day by day. Aside from starring in dramas, the 33-year-old has also appeared on many TV variety shows over the past two years, giving her optimal on-screen exposure. However, in a recent episode of Great Escape <密室大逃脫>, Yang Mi’s aging appearance shocked viewers. 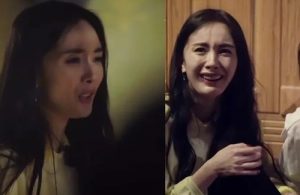 In a screen-capped photo of Yang Mi on the show, her skin appeared to have lost its brightness and elasticity. Not only were her eyelids and jawline sagging, but wrinkles have begun to show around her eyes and forehead. Many netizens compared Yang Mi’s appearance to other celebrities who are close in age like Angelababy, 31, Zanilia Zhao (also known as Zhao Liying 趙麗穎), 32, and Cecilia Liu (劉詩詩), 33. The consensus is that Yang Mi aged the most among those celebrities.

Speculations of Yang Mi having undergone jawline surgery arose, as it can cause her skin to sag. A netizen shared, “I once had a plastic surgeon client who told me that I shouldn’t mind having a chubbier face because if I undergo a jawline surgery, my bone and skin will separate like Yang Mi, and it will not last for long.”

Another netizen commented, “The surgery caused the bones to become smaller, so there is no support for her face muscles. The easiest way to see her aging is through her eyes as she went from having double eyelids to single.” 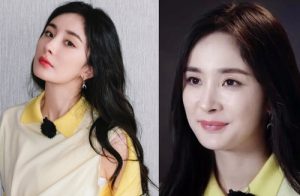 However, out of the four A-list celebrities, she is the oldest and gave birth the earliest. She has also maintained her physique post-childbirth. Some believe that her aging face on the show could be due to her thin frame, lighting, and makeup.