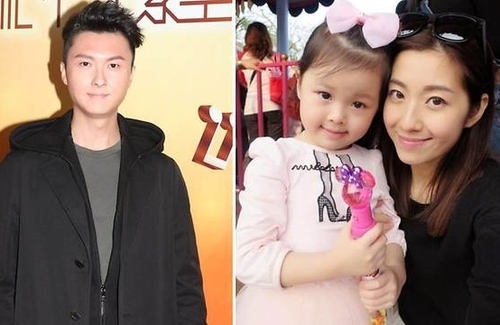 Vincent Wong (王浩信) and Yoyo Chen‘s (陳自瑤) marriage has been plagued with divorce rumors since TVB began heavily promoting the 35-year-old actor to their line of leading actors  in 2016. Although the couple verbally denied the allegations and made public appearances together to dispel the rumors, the speculations have not died down. Now, there is a new issue between the couple. The 37-year-old Yoyo allegedly wants to have another baby to enhance their marriage and provide a companion for their six-year-old daughter QQ (靖喬), but Vincent is not cooperating.

The duo tied the knot in November 2011 and welcomed their daughter April 2012. Two years ago, Vincent publicly expressed his desire to have a second child. At the time, he said, “I want to succeed in the summer of 2017, hopefully it’s a boy so it will make the ‘good’ Chinese character, and the age difference between the siblings won’t be too large of a gap.”

However, Yoyo just said she’ll leave it up to fate, but for the past two months, the star has been yearning for a second child. A close source revealed, “Actually, she wanted another baby a long time ago so her daughter can have a companion, but they’ve been dragging it on because her daughter was still in preschool and both Yoyo and Vincent were busy with work. On top of that, Yoyo wanted to take care of her health first, but recently, she thinks her health is at a good state and she doesn’t want the second baby to have such a huge age difference, so she wants to have another baby before 40 years old.”

Yoyo has been frequently meeting up with Fanny Lee (李漫芬) when she doesn’t have work to see Fanny’s 10 month old baby girl. Earlier, the two posted their meet up on social media, and Yoyo was seen excitedly carrying Fanny’s baby. Even when the mother and daughter were leaving, Yoyo needed to take a selfie with them and she was quite reluctant to leave. Yoyo’s baby fever is obvious, but Vincent’s hectic work schedule – back to back dramas and movie cameo appearances – makes it hard for them to try for another baby.