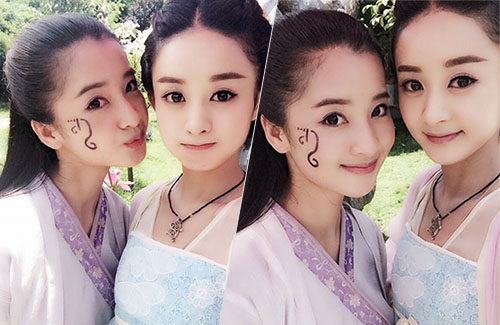 Earlier this month, a report claimed that Zanilia Zhao Liying (赵丽颖) had about 32 body doubles when she shot last year’s hit series, Princess Agents <楚乔传>, including horse-riding doubles, action stunt doubles, and even doubles for scenes where Zanilia had to kneel. The actress’s agency was quick to deny the reports—while a few body doubles were hired for Zanilia, the reported 32 was a bit too far-fetched.

While using a body double for simple drama scenes seems ridiculous, it is true that Zanilia had used a body double for some of her talking scenes in 2015’s The Journey of Flower <花千骨>. In scenes where Zanilia’s face did not have to be on camera, her body double Li Ke (李可) stood in for her. Li Ke does physically resemble Zanilia, to the point where the two could be mistaken as sisters.

The 26-year-old Li Ke holds a degree in film directing from Yunnan Arts University. After subbing in for Zanilia in The Journey of Flower, Li Ke has managed to find more acting opportunities for herself, having been cast in dramas such as 2016’s Demon Girl <半妖倾城> and Hot Girl 2 <麻辣变形计>. The future isn’t looking bad for this former stunt double!