The 27 year-old scares netizens with her pencil-thin legs.

Zheng Shuang (鄭爽) charmed viewers with her sweet looks in idol romance Love O2O <微微一笑很傾城>. With her candid and straightforward personality, she has maintained high popularity levels despite a few scandals. Recently, Zheng Shuang’s non-edited looks were recently captured on film, and her scrawny figure accidentally became a topic of netizens’ conversations.

Appearing on location with her mom to film a variety program, the 27-year-old star was dressed casually in an army green floral top and a short skirt, while her mother, whose hair was tied up in a bun, impressed netizens with her youthful good looks despite her age.

In contrast to her onscreen sweet and polished image in dramas, Zheng Shuang was also photographed for the first time on the streets without wearing makeup. However, her pencil thin legs and petite frame became the focus of netizens, who commented on her unhealthy body, “She’s way too skinny” and “Is that a skeleton?” 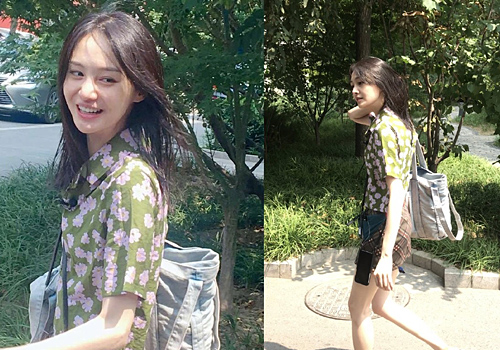