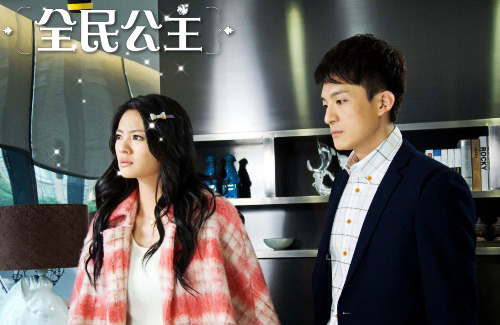 Mainland Chinese drama The Princess <全民公主>, which stars Taiwanese actress Ady An (安以軒) and mainland Chinese actor Sun Yizhou (孫藝洲), began airing on July 17. Hailed as an “avant-garde idol drama,” The Princess attracted much attention before its broadcast due to its popular actors, well-known director, and supposed unconventionality. Despite the drama’s high ratings, however, many viewers feel that The Princess’s selling plot – that it subverts the tropes typically found in idol dramas – is not entirely true.

The Princess follows the story of Zhou Xiaotong (Ady An), a domineering and bossy female who has been pampered and spoiled by her grandfather, with whom she has lived since her parents’ early death. Although she lives the life of a princess, she actually dreams of falling in love with a man whose heart is not polluted by the love of money.

As fate would have it, she meets Yu Zihao (Sun Yizhou), an orphan who has just been employed at her grandfather’s company and who looks at money as if it were rubbish. Xiaotong and Zihao fall in love, but she discovers an unsettling conspiracy behind the relationship. When her grandfather goes missing and she faces the threat of bankruptcy, Xiaotong must find out if Zihao is truly the love of her life or the one who has orchestrated her downfall.

Director Chen Mingzhang (陳銘章), known as “the father of Taiwanese idol dramas” and who has helmed smash hits like The Prince Who Turns Into a Frog <王子變青蛙> and Fated to Love You <命中注定我愛你>, shared that he deliberately devised many twists and turns in the plot, in order to let viewers witness the drama’s sense of innovation and experience the thrill of riding a roller coaster. Some viewers, however, have found The Princess too convoluted and ridiculous to be believable, a criticism that has often been leveled at older idol dramas.

Moreover, The Princess contains familiar clichés that have characterized idol dramas from all parts of Asia over the years. For example, Zhou Xiaotong is the typical headstrong female lead who, deep inside, is pure, kind-hearted, and easily deceived by honeyed words. Even when she encounters setbacks or ridicule, she remains encouraging and positive. As a result, she predictably wins the heart of male lead Yu Zihao, who originally planned to use trickery to gain control over Xiaotong’s property and possessions, but who still falls for her in the end.

Although much effort has clearly been put into The Princess’s storyline, the end result still falls short of its claim of innovation. Nevertheless, viewers may be content with watching familiar material rehashed in the hands of an expert director and a popular cast.