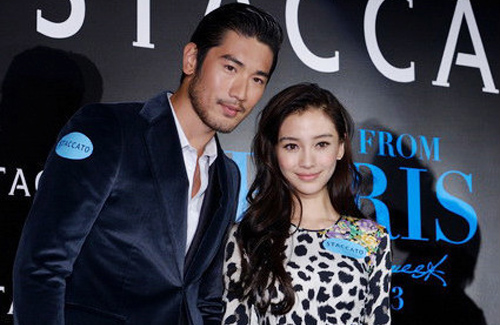 Recent news reported that Hong Kong model-actress Angelababy (楊穎) is in preliminary talks to play the role of Little Dragon Girl in Yu Zheng’s (于正) Return of the Condor Heroes <神鵰俠侶> television adaptation. The actress declared that the rumors were false, saying that she was never even approached for the role.

In a Shanghai fashion event held for the STACCATO brand yesterday, Angelababy stated, “I was never in talks to play the role. I don’t know why there would be so many rumors about this circulating online.”

Although she is dating Huang Xiaoming (黄晓明), Angelababy admitted that she never got a chance to watch the 2006 version that starred Xiaoming as Yang Guo, explaining that she does not have enough time to commit in watching a long television drama.

The Tai Chi 0 star then said that she will not rule out the possibility in starring as Little Dragon Girl in the future, saying, “It depends on the opportunity.”

If Angelababy was to be Little Dragon Girl, who would make the best Yang Guo for her? “I never thought about this, but it’s better if [the actor] is handsome!”

Angelababy Not Jealous of Vicki Zhao

In a talk show earlier, Huang Xiaoming gave guest star Vicki Zhao (赵薇) a birthday surprise by showing up at the program unannounced and presenting her with a birthday cake. When Vicki hugged Xiaoming, he tossed his clutches aside and lifted her up in his arms.

Asked if Angelababy was jealous of Vicki, she smiled and said, “Not bad. That just proves that his leg injury is improving!”

Xiaoming professed that he once had a big crush on Vicki and tried to pursue her. Angelababy stressed that she is not jealous of Xiaoming’s close relationship with Vicki and said, “Long-time friends are hard to come by. It is a very blissful thing. I’ve recently met up with a few of my primary school friends. When I see them, I have a feeling of warmth, like they are part of my family. Please don’t make it sound as if it’s something other than that.”

Also present at the STACCATO event was Taiwanese model-actor, Godfrey Gao (高以翔), who recently completed the shooting of a new idol drama. The 28-year-old City of Bones actor happily said that it had been an easy few months of filming because his role, an architect, is very much like himself. He also gushed that location filming for the drama gave him an excuse to explore Shanghai and Kunming.

Asked if he has met Angelababy before, Godfrey said that they previously met at a fashion show in Singapore a few years ago. Would Godfrey like to film a movie, television drama, or a commercial ad with Angelababy? Godfrey exclaimed, “Of course! If there is a chance to, I’d be more than happy to work with her. She is very charismatic, friendly, cute, and sexy. Any man would like her type of girl.”

The six-foot-five actor said that he would like to play a couple with Angelababy, but pointed out that he may be too tall for her. “If she does play my girlfriend, she will have to wear high heels all the time!”