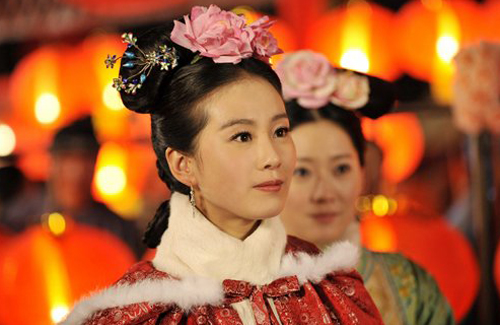 Above: Cecilia Liu will star in the sequel to “Bu Bu Jing Xin”.

The immensely popular time-traveling drama Bu Bu Jing Xin <步步驚心> recently released an alternate ending, in which the modern version of “Fourth Prince” (Nicky Wu 吳奇隆) is revealed to be the driver of the car that crashed into Zhang Xiao (Cecilia Liu 劉詩詩) and sent her back to the Qing Dynasty as “Ruoxi.” In the wake of this new ending, a Tangren staff member also confirmed that Bu Bu Jing Qing <步步驚情>, the highly anticipated modern-era reboot, is scheduled to begin filming in Tianjin on March 2.

Bu Bu Jing Qing will tell the story of businesswoman Zhang Xiao, who enters the workforce of a large-scale company but initially finds herself ostracized in the workplace. To her surprise, she gains the attention of her boss, Yin Zheng, setting off sparks of love from both sides. The kind and considerate Kang Sihan, however, also enters her world, and Zhang Xiao is forced into the center of the two men’s furious trade war as a result.

In a recent interview, Tangren producer Karen Tsai (蔡藝儂) revealed that although Bu Bu Jing Qing will integrate elements of business competition, the main plot will still revolve around love. She also added that the love story would not be of the “so-called sadomasochistic” type.

Ever since Nicky Wu, Cecilia Liu, “Tenth Prince” Ye Zuxin (葉祖新), and “Kangxi” Damian Lau (劉松仁) were confirmed to appear in Bu Bu Jing Qing, netizens have been wildly deliberating over the rest of the lineup. While it has been confirmed that “Eighth Prince” Kevin Cheng (鄭嘉穎) will not participate due to scheduling conflicts, no official news has been heard about “Fourteenth Prince” Lin Gengxin (林更新), who is currently mired in a dispute with his management company, Tangren. It has also been rumored that mainland Chinese actor Sun Yizhou (孫藝洲), known for his role in the iPartment <愛情公寓> series, may be joining the team as well. As always, Tangren insists on remaining tight-lipped and said that they will announce the entire cast list when it is finalized.