Chilam Cheung and Anita Yuen to Film Reality Show Together 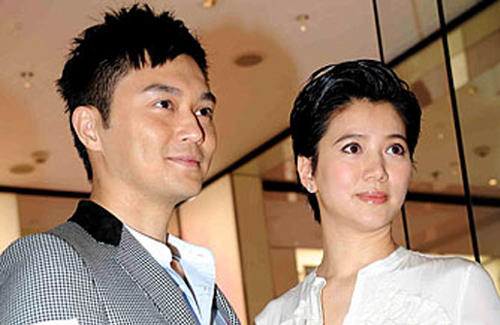 From dating to marriage to becoming parents, Chilam Cheung (張智霖) and Anita Yuen (袁詠儀) have been together for over 21 years. The celebrity couple rarely film onscreen projects together – their last collaboration being the underwhelming 2002 Taiwanese drama The New Judge <官場插班生> . However, they will return to the television screen again for Chinese reality show There’s You On This Road <一路上有你>, produced by Zhejiang TV.

The reality show is adapted from a South Korean variety program. It will feature three to four celebrity couples on the show and have them accept various challenges while traveling in rural South Korea. Chilam and Anita were reportedly hired for $36 million HKD for 12 episodes.

Besides Chilam and Anita, Chinese rocker Zheng Jun (鄭鈞) and singer He Jie (何潔) will also appear on the show with their spouses. Korean superstars Rain, Lee Min Ho, Kwon Sang Woo, and Jang Dong Gun are negotiating to make appearances on the show as well. The show will air early next year.

Though it has been a while since Chilam last starred in a mainland Chinese drama, the Hong Kong actor still has a large market and loyal fanbase in the country. He recently completed the filming of survival show 2 Days & 1 Night <兩天一夜> and was also invited to star in the second season of popular variety show Where Are We Going, Dad? <爸爸去哪兒2> with his son, which he had turned it down.
Chilam confirmed his appearance on There’s You On This Road with Anita. “It’s been a long time since the we collaborated. We are very busy so we haven’t had the chance to go on vacation together. We want to use this opportunity to work and have fun at the same time. This will be my first time going to Korea, and it’s a trip with Anita, so I had to say yes.”
Pointing out that Chilam and Anita were offered a very lucrative contract to appear on the TV show, Chilam laughed and agreed, “Yes, I’m very satisfied with the numbers, but everything will eventually go to Miss Yuen anyways!”
Source: Oriental Daily
This article is written by Addy for JayneStars.com.