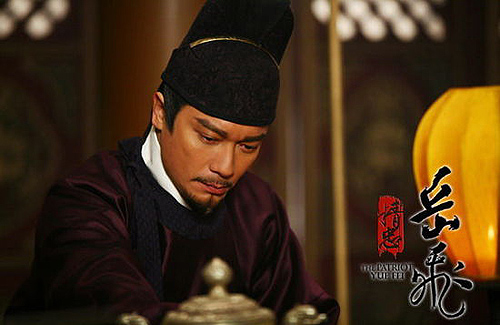 Although he is most known for the honest and sincere characters he has portrayed in TVB dramas, Hong Kong actor Gallen Lo (羅嘉良) will show viewers a different side of him when he appears as the treacherous court official, Qin Hui, in the upcoming TV series, The Patriot Yue Fei <精忠岳飛>.

Slated to begin airing on July 4, The Patriot Yue Fei tells the story of the revered Song Dynasty general, Yue Fei (Huang Xiaoming (黃曉明)). During this time, Qin Hui served as a leading government official and supported the idea of making peace with the invading Jin Empire. As a result of his involvement in the subsequent peace talks, Yue Fei was imprisoned and executed, leading many to believe that Qin Hui had betrayed the general.

Gallen shared that acting out Qin Hui gave him an “unprecedented pressure,” because he had to display the respectable aspect of the favored court official, while also hinting at the crafty man working for personal benefit. Nevertheless, he saw the character’s complexity as an interesting challenge and strove to magnify the dichotomy between Qin Hui’s loyal appearance and his more sinister undertones.

Before accepting the role, Gallen was not particularly familiar with this section of history, and admitted that he thought of Qin Hui as the textbook definition of a traitor. However, while perusing history books in preparation for the role, he learned that Qin Hui was not that simple of a character.

“Although [Qin Hui] was a sinister official, he liked poetry and literature,” revealed Gallen. “It’s because of his crime of supporting peace with the Jin Empire and framing Yue Fei that his accomplishments in calligraphy gradually became dim. The question I thought about the most was how to interpret this type of transformation that gradually turned an ambitious and talented man into a cunning and sinister official.”

When asked if he was afraid of receiving backlash for portraying such an infamous role, Gallen laughed and said he had been quite conflicted himself – he wanted to take on the challenge, but was also a little afraid. Now, however, his fears have been alleviated.

“If the drama airs and no one scolds Qin Hui, then I will have failed,” Gallen said. “But viewers are all very rational now, and can judge for themselves. The person they are scolding is Qin Hui and not me, Gallen Lo.”