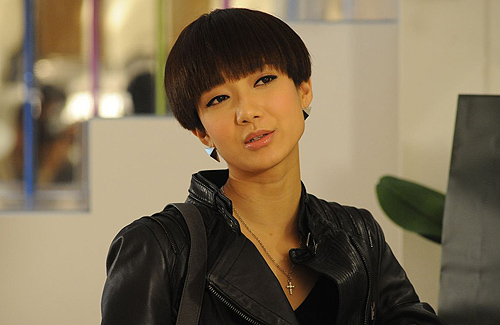 TVB’s new television drama Awfully Lawful <熟男有惑> have received mixed reviews from critics so far, but with a debut of 29 rating points and a peak at 30 points, the legal comedy is definitely looking to be one of TVB’s most well-received dramas in months.

Awfully Lawful tells the comedic romantic lives of four middle-aged men who work as solicitors under the same law firm. Starring a strong cast led by the acclaimed Roger Kwok (郭晉安), the supporting cast of the 20-episode drama have also been receiving notable attention from netizens and the media. Among the more popular discoveries is Grace Wong (王君馨), who portrays the unbridled love interest of lead Pal Sinn (單立文).

Grace, who entered TVB after winning first runner-up in the 2007 Miss Hong Kong Pageant, made headlines last year when she revealed her thoughts about virginity and religion. Despite her insistence on chastity, it is Grace’s sexy image that is contributing to her current rising popularity. In Awfully Lawful, there is a lot of sexual tension between the characters portrayed by Grace and Pal.

On her role, the 27-year-old commented, “She flirts with him a lot. She plays hard-to-get around him all the time. She is extreme!”

It was also reported that Grace provided her own bikini to wear during a swimming scene. A crew member revealed, “Originally Grace was provided with a one-piece suit to wear, but she said she brought her own bikini. It does have a much better effect. Not many fadans are willing to expose that much in front of the camera. [Grace’s career] should be able to rise even higher in the future.”

With five dramas at hand for 2013, Grace’s exposure rate is also increasing. As of June, only Grace’s Sergeant Tabloid <女警愛作戰> and Awfully Lawful have hit the screens. Coming in the next few months for Grace will be the highly anticipated The Hippocratic Crush 2 <On Call 36小時Ⅱ>, period drama The Verbal Side of Court <舌劍上的公堂>, and the Dayo Wong (黃子華) comedy My Prime Lady <My盛Lady>, which is currently in production.