Above: Huang Xiaoming and Ruby Lin star in “The Patriot Yue Fei”.

The cast and crew of The Patriot Yue Fei <精忠岳飛> held a news conference in Shandong on June 14, in order to celebrate the anticipation surrounding the biopic of the Song Dynasty general, which is slated to begin airing on July 4. In attendance were producer Stanley Tong (唐季禮), director Gaau Leung Guk (鞠覺亮), and various members of the star-studded cast, including Huang Xiaoming (黃曉明), Gallen Lo (羅嘉良), and Cheng Pei Pei (鄭佩佩).

The Patriot Yue Fei has attracted much attention, partly for being Huang Xiaoming’s first foray back into television after several years of focusing on his movie career. However, for Xiaoming, the deal was sealed once he learned that he was being given the opportunity to play the title character.

“Since I was young, I thought that Yue Fei was our hero,” Xiaoming said, adding that he always had a bit of a “Yue Fei complex,” since “he encompasses the Chinese traditions of loyalty, filial piety, bravery, humanity, righteousness, courtesy, wisdom, and trust. I adored him a lot. I believe that in every man’s heart, there lives a Yue Fei. He is every man’s dream, the psychological model for every Chinese man.”

In The Patriot Yue Fei, Xiaoming portrays the lead role from when Yue Fei joined the army at age 19 to when he died at age 39. While many of his fellow cast members are experienced thespians, the drama also features a few newly discovered actors, causing some to view The Patriot Yue Fei as an idol drama. However, Xiaoming is unfazed by these accusations; while he acknowledges the drama’s idol characteristics, he calls it a historical epic as well. Moreover, he feels that “the more important thing is the mentality you get from watching this drama. [Yue Fei’s] loyalty and filial piety – these are the themes that our drama emphasizes the most.”

Because the news conference took place a few days before Father’s Day, Xiaoming took the opportunity of being in his home province of Shandong to publicly express his love for his father. He shared how he used to ride on his father’s shoulders, and how, when Xiaoming was sick, his father once carried him across the pedestrian bridge to the hospital.

“He is the man I love the most in my life,” Xiaoming declared. “I film so that I can make more money to repay him, but because of this, I have sacrificed a lot of time. I want to take [my parents] on a trip around the world while they are still able to move!”

Huang Xiaoming dropped 20 pounds so fast that he started to have heart problems. 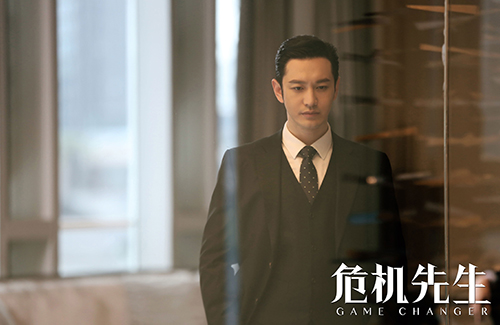 “Game Changer” is based on true stories where PR teams were put to the test to overcome bad publicity, with cases involving domestic abuse and gender inequality.