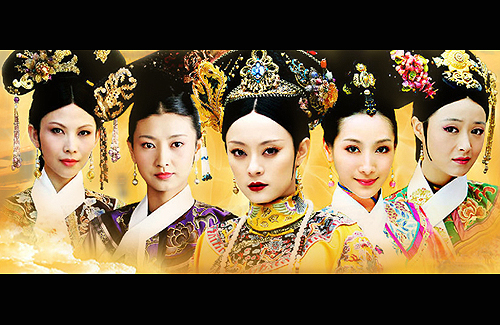 Period drama Legend of Zhen Huan <后宮 甄嬛傳>, which stars mainland Chinese actress Betty Sun (孫儷) and Hong Kong actress Ada Choi (蔡少芬) in a story about a young woman’s rise to power in the Qing Dynasty palace, began airing in June on Japanese television station, Fuji TV. Wildly successful in its home country, Legend of Zhen Huan has led to much attention and heated discussion in Japan as well, further fueling the hope that the drama can become a household name worldwide.

The 76-episode-long series, which was split into three parts for its Japanese broadcast, was aired under the title Women Vying for Power in the Palace <宫廷の诤い女>. The name change was due to the hanzi and kanji characters for “zhen huan” (甄嬛), which are not frequently used in the Japanese language and are therefore unrecognizable to most Japanese viewers. However, some netizens complained that the new title was “too bare” and lacked the implicit appeal of the original.

Despite this complaint, Asia Republic Entertainment Inc., the Japanese company in charge of the broadcast, has nevertheless proven diligent in bringing the drama to Japanese viewers. The Japanese version uses the same voices as in the mainland Chinese original, but includes Japanese subtitles. Asia Republic Entertainment even added helpful explanations for phrases that Japanese viewers might have difficulty understanding, such as ancient Chinese poems that hold different connotations.

After just one week, Legend of Zhen Huan amassed more than 39 million Japanese viewers. A Fuji TV employee revealed that after the first episode aired, the number of hits for their Legend of Zhen Huan website multiplied five-fold, and that they also received many phone calls inquiring about the drama. Since the series airs at 5 p.m. on weekday evenings, it is particularly popular among housewives and students.

Legend of Zhen Huan has also become a hot topic on Japanese entertainment discussion forums. Many netizens praised the gorgeous costumes, stage props, and settings, as well as the cast’s strong acting skills. Favorites among the cast include Betty Sun, the female lead; Chen Jianbing (陳建斌), who portrays the emperor; and Rulu Jiang (蔣欣), who plays the irresistibly devious Hua Fei.

Some netizens shared that in order to catch the latest episode of Legend of Zhen Huan, they would immediately rush home after work. Others joked that they longed to take a leave from work so they can finish watching the series.

Certain viewers, however, have criticized the drama for its historical inaccuracy and its poor acting. “Out of all of Asia,” wrote one, “Chinese actors are the worst at crying scenes.”

International Acclaim for an “Immortal Masterpiece”

Prior to airing in Japan, Legend of Zhen Huan made waves in other parts of Asia, such as Taiwan, Korea, and India. In Taiwan, the drama achieved higher ratings than those for popular talk shows like Here Comes Kang Xi <康熙來了>. Taiwanese plastic surgeons even revealed that requests for “beautiful eyes like Betty Sun’s” surpassed requests for Korean-celebrity features.

Earlier this year, it was reported that an American company planned to adapt Legend of Zhen Huan for English-speaking audiences. The original Chinese version has already aired twice on Chinese-language channels in the United States, but the English version is still in the production stages. Although Chinese fans are skeptical of the English-language adaptation, claiming that the translation will be much too difficult, it is exciting to imagine the international future that the drama may hold. Taka Tsukazaki, the CEO of Asia Republic Entertainment, perhaps said it best when he called Legend of Zhen Huan “an immortal masterpiece that will still give rise to discussion even after five or ten years.”