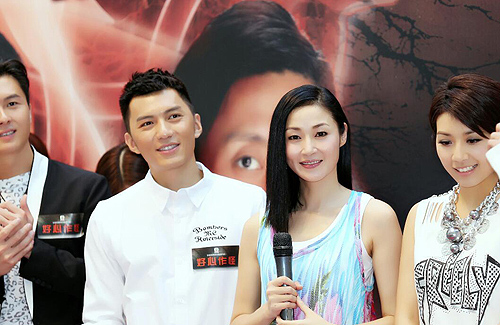 A Change of Heart <好心作怪> has averaged more than 20 points since its airing. The 30-episode drama  will be ending its run on July 12. Bosco Wong (黃宗澤), Mandy Wong (黃智雯), Joey Meng (萬綺雯) and Vincent Wong (王浩信) were at an event yesterday to promote the drama and encourage audiences to tune in to the finale of the series. Yesterday was also Vincent’s 30th birthday and the artists presented him with a cake to celebrate the happy occasion.

During one of the games segment, Vincent was carrying Mandy on his back and though Mandy is rather slim, Vincent’s face turned green and he was seen perspiring heavily. Vincent commented that Mandy is actually very fit but because of his non-stop filming day and night recently, his body is weak and he felt tired carrying Mandy. Asked of his birthday wishes, Vincent said that he hoped his wife can stop working and be happy staying at home to look after their daughter. Vincent also added that he would like to have more children but stressed that lately he was not in good shape to create babies.

After the games, Bosco teased Vincent as he found two round marks impressed onto his back but they soon realized that the marks were actually left by Mandy’s round-necklace and not from her chest.

Earlier on, Joey mentioned that while filming the drama, she was emotionally drained due to the dark role she portrayed. Joey and Benjamin Yuen (袁偉豪) shared an intimate kissing scene in A Change of Heart.  Joey watched this scene with her husband at home. “It’s very embarrassing, I told him that the effect of this scene is not so ideal; [I] should refrain from such scenes in the future and he immediately agrees.”

Playing dual roles as twins in the show, Bosco has been kept very busy lately. He was said to be working hard in preparation for the opening of his new restaurant, “I am looking at shop spaces in Kowloon and the investment is easily a seven-figure amount. I will be investing with two to three friends.” Bosco also commented that he has many friends and would have VIP rooms in the restaurant. Asked if he will install CCTV in the rooms, he replied that “this is basic security”.

Leading actress, Niki Chow (周麗淇), was however not at the promotional event yesterday as she was working in Hengdian, China. But she called during the event and spoke to the cast. Bosco and Niki made a promise that if the ratings for the series are good, they will both put on swim wear to thank the audience. Bosco said he has already bought a bikini for Niki and she looks forward to seeing Bosco in his swimming trunks.