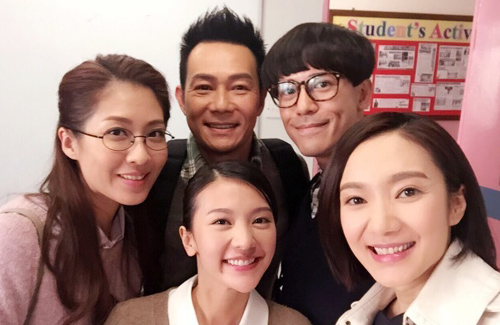 Sammy, as well as supporting stars Gloria Chan (陳華鑫) and Christy Chan (陳潔玲), filmed a beach scene in Tsuen Wan yesterday. Despite the cold weather, the actresses showed professionalism while wearing only their bikinis. The humorous scene was about Gloria saving Sammy from drowning. Gloria performed CPR on Sammy wearing only her bikini.

Asked if Gloria was worried about having a wardrobe malfunction while filming the scene, Gloria said she have never thought about it, and added later that she would put on her safety tape for the next scene.

Portraying a couple with Grace Wong (王君馨), Sammy explained that his character is the only male teacher at an all-girls high school. Simple, honest, and shy, Sammy’s character is awkward around women. He often fantasizes about Grace, who is obsessed with having sex.

As the drama openly and explicitly talks about the topic of sex, Sammy believes that the drama will be explosive once it premieres on television.