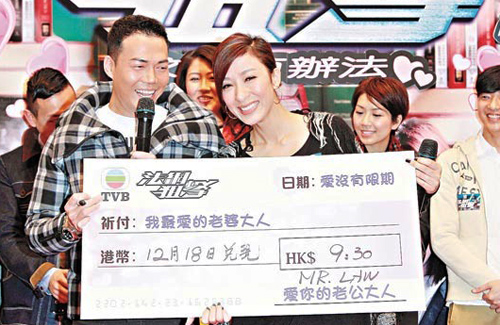 Now that the 2012 TVB Anniversary Awards are over, it is time for another new year to begin. TVB kicked off the 2013 television drama season with Missing You <幸福摩天輪> and Friendly Fire <法網狙擊>, which both premiered on December 18.

On Tuesday, the cast of Friendly Fire held a widely-publicized promotional event at the Metroplaza shopping center in Kwai Fong. The winners of the TVB Anniversary Awards, including TV Queen Tavia Yeung (楊怡), Most Improved Actor Oscar Leung (梁烈唯), and Outstanding Artist Benz Hui (許紹雄), were all in attendance.

Friendly Fire’s lead actor, Michael Tse (謝天華), opened the event by reenacting a scene from the drama. Holding a large bouquet of roses, he walked down a long red carpet. He knelt in front of Tavia, and professed, “Please marry him!”

“Which him are you talking about?” Tavia asked in a fit of giggles.

“The one who is modest and humble!” Benz Hui immediately yelled afterwards, referring to Him Law.

Afterwards, Michael presented Tavia with a large check, affirming his love to her. However, he signed the check as “Mr. Law,” and later added, “This check will be your long-term food stamp!”

Tavia Yeung Tells Him Law to Save His Tears

When Tavia won Best Actress Monday night, Him Law broke into tears. Asked if Tavia had forgotten to thank anyone else during her Best Actress acceptance speech, Tavia explained that she still left out a lot of people to thank, and it was impossible to list them all out at once. “It’s all in my heart. He knows,” said Tavia.

The TV Queen also did not thank Him for his tears, but said instead, “Are you sure it wasn’t because he got something in his eye? He texted me and said I was amazing. I called him and told him to not cry, save the tears until he wins [an award]. He’s so silly!”

But why did she not run off to hug her boyfriend when her name was announced? Tavia laughed, “Well, he didn’t stand up for me to do it!”

Michael felt that the winning results were fair, and expressed that his happiest and most shocking moment was to see Carol “Dodo” Cheng (鄭裕玲), Chin Ka Lok (錢嘉樂), Sunny Chan (陳錦鴻), Henry Lee (李成昌), and Benz Hui win the Outstanding Artist awards. After a moment’s thought, Michael laughed and said, “Actually, DoDo Jeh hasn’t filmed dramas in a while. Is she even qualified?”

Michael does not think he is qualified to win the award yet, expressing that he may have to wait a few years before he is eligible to win.

Tavia debunked the rumor that claimed her to have exchanged the TV Queen award for a five-year extension of her management contract. She said, “I still have many years left in my contract. If I had to add something, I would request for an increase in my salary first!”

Michael laughed, “I think she’s willing to sign even a fifty-year contract now!”