“The Patriot Yue Fei” to be Adapted into 3D Film 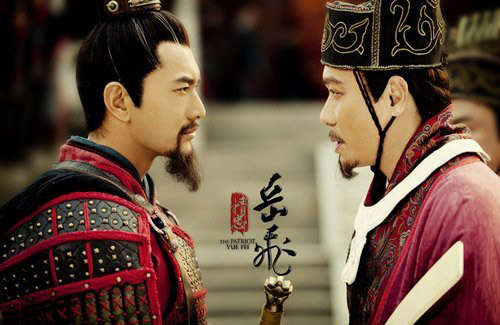 The Patriot Yue Fei <精忠岳飛>, the currently airing biopic about the famous Song Dynasty general, has been in the working stages for the past ten years. Despite complaints from netizens, producer Stanley Tong (唐季禮) maintains his faith in the series and hopes that it will give the character an international appeal.

Yue Fei: “The Spirit of the Chinese People”

Having idolized the general since youth, Stanley admitted that if he could make only one work in his entire life, he would “definitely choose Yue Fei.” As a man whom Sun Yat Sen once said “embodies the spirit of the Chinese people,” Yue Fei possesses a spirit and system of values that Stanley feels is “very internationalized,” and he hopes that more people will come to know him through The Patriot Yue Fei.

“Hua Mulan, pandas, and other traditional Chinese images have already spread to Hollywood,” explained Stanley. “I hope the next one will be Yue Fei…. I want to use this work to introduce him to the world.”

Yue Fei’s patriotic loyalty and filial piety are both highlighted in the drama, as is his complete and unwavering devotion to his wife, Li Xiao’e. Historically, the two met amid the chaos of war. After their marriage, Xiao’e gave birth to three boys, while Yue Fei remained faithful and never took a concubine. After his murder, Xiao’e was banished to southern China but resolved to raise her three sons by herself.

Stanley feels that Yue Fei’s concept of love is worth allowing youth to think about: “In that generation, Chinese men could have many wives, but Yue Fei was faithful to Li Xiao’e from start to finish. It is a classic representation of monogamy.”

The love plotline, however, has led to accusations that The Patriot Yue Fei has too many idol drama influences. For example, when on the battlefield, Yue Fei encounters a woman named Wu Susu, who becomes a close female friend. Since the character was completely fabricated, some viewers thought she was a potential “third party” in the relationship. In response to this, Stanley said she was added in to make the love story “more interesting to watch,” though he added that Yue Fei does not do anything to disappoint his wife.

Another scene that came under fire was when Yue Fei washed Xiao’e’s feet for her. Many netizens complained that it was like something out of a drama by Chiung Yao (瓊瑤), a Taiwanese novelist known for writing melodramatic romances. However, Stanley insisted that the foot-washing scene was reasonable and necessary for the series.

“Yue Fei is very attentive when it comes to family and has a strong sense of responsibility,” he said. “In order to be filial, he could wash his mother’s feet, so why he can’t wash his wife’s feet for the sake of love? If the two were reunited and just sat there saying very sappy words of endearment, it would be extremely fake. That would be more like an idol drama, wouldn’t it?”

Leading actor Huang Xiaoming (黃曉明), who portrays the titular character, has also been accused of being “too perfect,” since his version of Yue Fei is constantly stripping half-naked to show off his build, accepting all sorts of “younger brothers” to watch over, and writing touching love poems to his beautiful wife. Nevertheless, Stanley still stands by his initial casting choice, and even said that he has worked with very few actors who could match Xiaoming’s concentration, diligence, and professional standard.

“Out of all of the male actors nowadays,” he shared, “I don’t think there is one more suited to play Yue Fei than Huang Xiaoming is. First of all, he is the most handsome – so handsome that people even want to attack him. As a result, he can portray Yue Fei’s youthful simplicity and impulsiveness very well. When he puts on a beard, he can portray Yue Fei’s maturity after being made commander very precisely as well. So I can think of no other actor. If you have a good one, you can recommend him to me.”

As for comments that Huang Xiaoming went bare-chested one too many times in the series, Stanley remarked, “Since he has such a good build, there’s no harm in showing it off a bit. What’s more, Xiaoming is extremely dedicated to his work. It was very cold when filming, but he never complained.”

According to Stanley, The Patriot Yue Fei will be later adapted into a movie version, which will be shot in 3D to make the action scenes more stunning. Huang Xiaoming will continue to portray the Song Dynasty general.