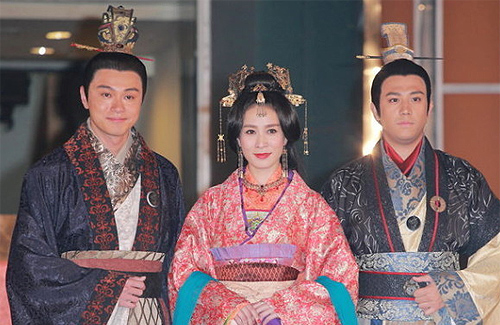 TVB held its annual Sales Presentation last night to promote the 2015 drama line up. Over 200 of the station’s artistes attended, and many performed in drama skits to attract the 1000 advertisers at the event.

Although Charmaine Sheh (佘詩曼) films with TVB under a per-series contract, she is still highly valued by the station and placed in the center spot at the Sales Presentation group photo along with TV King, Moses Chan (陳豪). Even Roger Kwok (郭晉安) and three-time award winner, Wayne Lai (黎耀祥), had to step aside for the night.

Even more shocking was Kate Tsui’s (徐子珊) placement during the group photo. Rumored as a hot contender to win this year’s Best Actress award due to her performance in Tomorrow is Another Day <再戰明天>, Kate unexpectedly stood at the end of the first row. Even Myolie Wu (胡杏兒), whose contract with TVB is still unsettled, was placed closer to the center.

It is speculated that TVB placed more attention on Myolie, in hopes that she would renew her contract on good terms and stay with the station. Kate said, “Myolie entered [TVB] before me, so she is my senior. [The photo position lineup] is arranged by TVB. I hope she doesn’t leave the station and more artistes stay. It’s still a long time before my contract expires.”

In past years, TVB played drama trailers especially filmed for the Sales Presentation, gauging advertisers’ interest in proposed projects. Often, the resulting final projects differed from the initial drama trailers or in some cases, dramas were dropped due to low commercial interest. This year, TVB only presented dramas which have entered production along with actual scenes from completed footage.

One of the highly anticipated series is With or Without You <東坡家事> featuring Bobby Au Yeung (歐陽震華) and Joey Meng (萬綺雯). Wearing their traditional costumes, Joey gave Bobby a massage in the first part of their skit. Later, Vincent Wong (王浩信) knelt on the ground and let Bobby slap him multiple times.