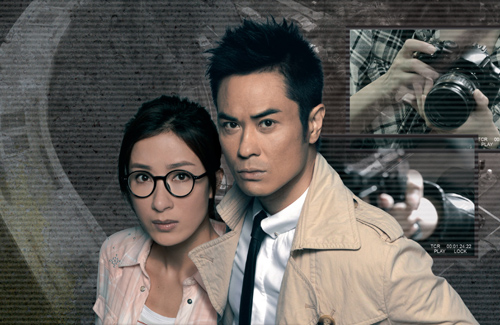 Eye in the Sky is a 20-episode serial drama for Hong Kong broadcast television about Szeto Shun (Kevin Cheng), a promising police investigator turned security supervisor after an unresolved and mysterious arson. During his tenure as a security supervisor, he encounters Cheung Lik Hang (Ruco Chan), an aspiring security guard with a secret past. As they become more than just close friends, their adventures collide with the investigations of Jenny “Jan” Ng (Tavia Yeung), an unsuccessful private detective. Kong Wui Hoi (Lau Kong) plays a criminal mastermind with seductive secret agent Hon San (Vivian Yeo) as his assistant. Romance, mystery and comedy abound in this drama series.

The English title, Eye in the Sky, lacks as much originality as its content. Does the eye in the sky refer to the surveillance cameras and CCTV or does it proselytize didactic values? The title inevitably leads one to consider if something greater than humanity is monitoring human behavior. With TVB, the ending always closes with justice and morality, so perhaps it is a promotion of didactic values. On the flip side, this title actually rhymes. Are the producers trying to compose a nursery rhyme or a clever and memorable title? More effective titles could include the Szeto Files or even Inspector CCTV or very simply CCTV. At least, the Chinese title fares slightly better as it adequately points to surveillance cameras.

Eye in the Sky is essentially a hack job of two popular British television series, Broadchurch (2013) and Sherlock (2010 – present). The overly emphasized use of CCTV in Eye in the Sky is obviously borrowed from Broadchurch while the characters are copies of those from Sherlock. Not only did they copy the major players in Sherlock, they even invented their own versions of practically every Sherlock case from “the woman” to the taxi driver serial killer. Even Szeto’s mistaken arrest and trial as the suspected arsonist is a rendition of Sherlock’s identification and subsequent arrest for kidnapping a pair of siblings. I can name more scenarios but will refrain from assembling a tirade of obvious associations. Did the producers think no one would notice the similarities or were they just so brazen that they equate plagiarism to poetic license? As an investigative drama, Eye in the Sky moves relatively slowly. The early plot focuses on the identity of Szeto Shun’s mysterious twin and unravels into a series of bland/insipid detective stories relying on the use of CCTV and hidden cameras to solve mysteries. The core of the series should be a battle of wits between their Moriarty-like rival, Kong Wui Hoi, and their Sherlock copy, Szeto Shun, but the storyline opts for the overused and unoriginal plot about a separated and lost at birth twin, who very naturally turns evil while seeking recompense for his early suffering. Since the producers have plagiarized everything else, they should have just adopted the flirtatious rivalry between “the woman” and Sherlock for Hon San and Szeto. At least, that would have made a better story than their mediocre plot involving another tragic victim of circumstance and an unlikely and impossible romance between Szeto and Jan.

Logical deductions are the best part of every good detective story, but the scriptwriters of Eye in the Sky chose to intermingle CCTV evidence with super sleuths, thus relegating deductions to an inferior back seat position. Suddenly, super sleuths, such as Szeto, loses investigative prowess because his detective work now relies heavily on recorded evidence and entrapment. Anyone can be a good detective if irrefutable proof of crime is readily available on camera and entrapment is considered viable or even admissible evidence in a court of law.

Because this is a drama series about surveillance, every type of camera or recording device has been thrown into this production. This is a true festival for all electronics advertisers while viewers are bombarded with camera phones, video cameras, espionage spyware and even the bulky SLR camera that every investigator carries during their stakeouts. Even worse, nonexistent technology, such as cameras embedded into a human being, seamless mirrors and holograms that generate shadows, have been included in this real-time drama. The fictional technology presented in this series is not only unrealistic but also insulting to viewers. This is not a science fiction fantasy where any type of technology exists. Rather, this is a series about modern day crime investigation, so please use real technology and clever crime solving skills to impress the audience.

As Szeto Shun, Kevin Cheng performs a poor impersonation of Benedict Cumberbatch’s Sherlock. The familiar prayer-like hand pose and the theory that eating hinders brainwork are only some of the borrowed traits from the character of Sherlock. Although this shameless act of imitation is largely the fault of producers, I would have expected more integrity from a two-time award winning best actor such as Kevin Cheng. I think he should have declined the role of Szeto Shun just to preserve his own artistic merit.

Like Sherlock, the character Szeto insists on not understanding romantic love. Not only does Sherlock lack this understanding, he literally has no consideration for anyone regardless of age, gender or relation while Szeto is completely cognizant of compassion as demonstrated by his affection for his parents and his sympathy for Ho Ye Gu. By incorporating compassion into Szeto’s character, the producers try to mold Szeto into a more amiable character that is palatably acceptable for the Asian audience. But by default, the producers create a dichotomy in this character, leading to an inconsistent gap in the character of Szeto. How can an individual understand compassion without comprehending passion! And suddenly, Szeto miraculously develops feelings of love in the end just to suit the producers’ needs for a romance. Ruco Chan is definitely a miscast for the role of Cheung Lik Hang. Imagine an identical twin with such similar traits that no one can differentiate one twin from the other. How can one twin grow three inches taller after a series of cosmetic surgeries? That physical change clearly defies logic and character consistency. Fortunately for Ruco, he performs adequately well for all of his sinister roles despite the poor character development and weak plot line. Tavia Yeung’s Jenny “Jan” Ng is simply ridiculous. Her character defines the illogical. Overly emotional in all aspects of life from her romantic interests to her investigations, she eclipses her own action and judgement with her lack of reason. These traits do not befit an investigator of any calibre, so her character is not only unrealistic but also highly unwatchable. No level of acting could have saved this character from these scripting flaws.

Samantha Ko’s Agatha Lam needs a wardrobe adjustment. Flashing audiences with her legs will do little for her acting career. Pouting on camera also does not help. To attract cinematic attention, Samantha Ko needs to explore new roles outside of her comfort zone as a bimbo. Likewise, Tony Hung needs to learn facial expressions. Nothing about him as Tai Fu Lung convinces me that he is a world-class criminal with a high profile repertoire. Perhaps, he should continue to pursue a career in travelogues instead of drama.

Lau Kong’s criminal persona is largely dwarfed by his handicap of being blind. He has little opportunity to use his eyes and thus, fewer expressions of anything can be conveyed to the audience. Furthermore, there is no real advantage for his character to be blind or seeing. The storyline could have continued without him being blind.

Moderately sultry, Vivian Yeo succeeds where Samantha Ko fails. The short tight outfits suit her well as the naked yogi (yoga practitioner). She is moderately acceptable as this mock version of “the woman,” but her character lacks the necessary intelligence to completely fulfill this role. Fortunately for her, that is a character flaw not of her doing.

As a drama series, Eye in the Sky demonstrates a genuine lack of imagination. Everything is borrowed. Without a doubt, Eye in the Sky is plagiarism at its best. If “brainy is [meant to be be] the new sexy,” then Eye in the Sky certainly falls short on both ends. From the poor detective stories to the lack of creativity, Eye in the Sky can only be awarded 1 star. And, the 1 star is for being gutsy enough to insult the intelligence of its audience. In terms of artistic merit, there is unfortunately very little to applaud.