Director John Woo (吳宇森) held a press conference for his disaster epic The Crossing <太平輪> at the Cannes Film Festival on May 19. Stars Huang Xiaoming (黃曉明) and Takeshi Kaneshiro (金城武) were present and spoke briefly about working with their beautiful female colleagues.

It took five years and 400 million RMB, but Woo’s dream project will finally make it to the big screen later this year. Different from his usual action-packed creations, The Crossing will focus on love and courage amidst adversity, as told through the perspectives of three couples aboard the ill-fated Taiping steamer.

Collaborating for the first time, Chinese actor Huang Xiaoming has nothing but praise for his South Korean co-star Song Hye Kyo (宋慧喬). Both top artistes in their respective countries, many fans are looking forward to witness their on-screen chemistry. Despite their language barrier, the two enjoyed working together on-set and are grateful for the opportunity. Xiaoming described his co-star as gentle, and agreed when a reporter called Song the most beautiful woman in Asia.

Not at all worried that his comment would irritate girlfriend Angelababy, who has tagged along for a vacation in France, Xiaoming added that the two women are both beautiful in their own ways. “Song Hye Kyo is very pure and her eyes are sincere. She will always be a goddess regardless of her age. Angelababy, on the other hand, has a more western feel.”

Despite being in the industry for over twenty years, Takeshi Kaneshiro is still embarrassed about shooting kissing scenes. Portraying a couple with Japanese actress Masami Nagasawa (長澤雅美), Takeshi shared that they were given a kissing scene early in the filming schedule. Complete strangers working together for the very first time, the two artistes initially felt awkward shooting the scene though eventually overcame their nerves once they got to know each other better. 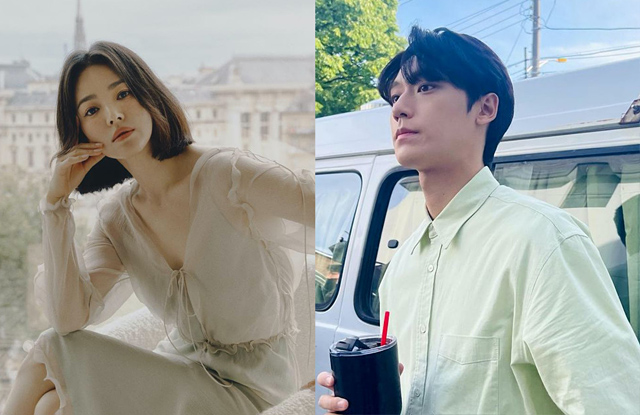