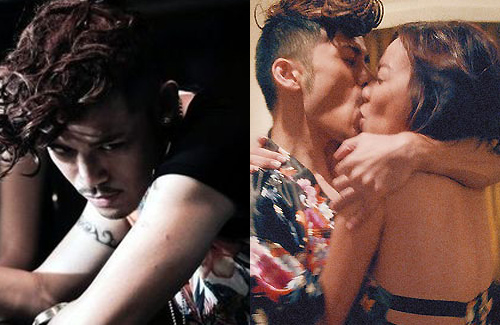 As we are nearing the the January 10, 2013 release date of Young and Dangerous: Reloaded <古惑仔：江湖新秩序>, Jing Productions has finally started the big marketing campaign for the Teddy Boy comic film reboot. Trailers and behind-the-scenes footage have finally been released, creating hype for the upcoming gangster film.

Sammy portrays Ugly Kwan, a member of the Hung Hing triad, who has an illicit affair with his boss’ wife Anna, portrayed by Winnie.

After stripping nude for the 2010 film Amphetamine <安非他命>, Winnie decided to take a break from her silver screen career to focus on her cosmetics business. When Wong Jing invited her to return for Young and Dangerous: Reloaded, Winnie considered his offer for two months.

“I didn’t feel like stripping again, and but I know I would get more job offers if I accepted the role,” Winnie said.

“And it’s true. After I filmed the movie, I began to receive more jobs in the mainland. My work schedule is full until the Lunar New Year. I really thought for a long time before accepting the role, but after discussing this over with my boyfriend, he supported my decision.”

In Bed for Five Hours

Although the Category III bed scene is only 20 seconds in the movie, the entire scene took almost five hours to film. It was reported that Sammy was very nervous around Winnie, and he consistently blocked Winnie’s private parts with his hands. Wong Jing was not satisfied with Sammy’s performance, and shouted, “We will not stop working unless you get more intense!”

Winnie, Wong Jing’s long-time collaborator, explained, “I know the scale of Wong Jing’s demands. I had to film a love-making scene for Amphetamine in 2009. That film was also a Category III film. However, the bed scene in Amphetamine was to show the love our characters had for each other. In Young and Dangerous: Reloaded, it is a different scenario. He in bed with his boss’ wife. It is lust, not love. In bed, they are intense, not soft.”

Winnie revealed that she has never met Sammy before the film production began, and after a few days of working together, they had to film the bed scene. “We were all stressed about [the scene], especially him. He’s a very quiet person. The only thing he would do is to read the script, and that was what he did all day. But I do feel that he’s very professional. Before we filmed the bed scene, we had to drink a lot of alcohol.”

Sammy is not unfamiliar with bed scenes. In Lan Kwai Fong 2 <喜愛夜蒲2>, Sammy had an intense make-out session with Liu Yuqi (刘羽琦). “It’s different this time,” said Sammy. “The bed scene in [Young and Dangerous: Reloaded] is much more intense and requires a lot of movements. Both of us have to be very crazy, and in the end, we would spit out profanity at each other.”