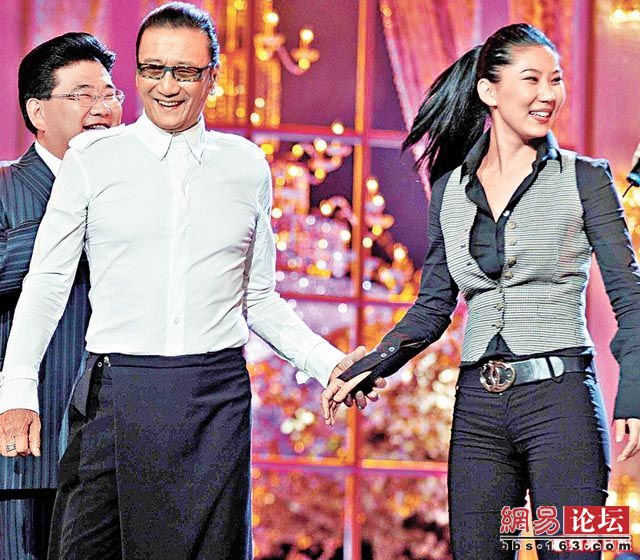 Seventy-three year-old Patrick Tse Yin divorced twice from Yan Chun and Deborah Dik (mother of Nicholas Tse Ting Fung and Jennifer Tse Ting Ting). In 2005, Patrick started dating Coco , a Shanghainese woman forty-seven younger than him. Earlier, Patrick said that Coco had “dumped him,” but clarified later that he was only joking.

In fact, Patrick was still very much in love with CoCo . The couple’s relationship was very stable. He paid for all of Coco ’s living expenses, as well as her school tuition bill. Coco started taking English classes in Great Britain to improve her skills.
Earlier, reporters spotted Patrick driving a Mercedes jeep in Happy Valley . Patrick was wearing a cap, while Coco sat in the passenger seat. Despite the traffic congestion, Patrick appeared animated in conversation. Coco had a listless expression and repeatedly wiped the sweat on her forehead.

Since Patrick and Coco started dating in 2005, the public often perceived their relationship negatively due to their forty-seven year gap. While filming a commercial earlier, Patrick said that he and Coco had separated. An inside source revealed that Patrick and Coco did have a temporary split, but it did not last long before they reunited.

Considered Moving to Great Britain
Noticing that Coco did not have any valuable skills, Patrick encouraged her to study English in Great Britain , while broadening her life experience. For many months, Patrick often appeared at events by himself. With Coco’s return to Hong Kong during the summer break, he stayed close by her side.

In a telephone interview, Patrick said his relationship with Coco did not change. “Since Coco is back, I am spending some time with her. She has not completed her one-year studies in Great Britain yet.” Denying that he was paying for Coco’s tuition bill, Patrick said, “She has a lot of money, but will consider allowing her boyfriend to accompany her in Great Britain .”


Jayne: Patrick Tse reminds me of Playboy founder, Hugh Hefner, who despite his advanced age, still dates women in their twenties. Perhaps love exists in all forms, but can women truly date men who are their grandfather’s age??