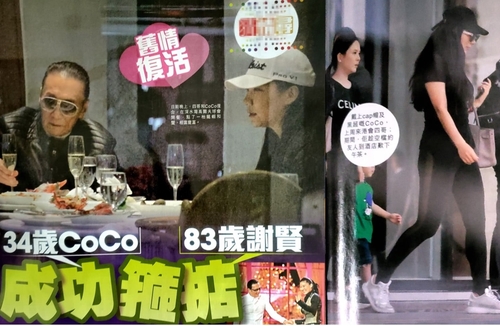 Patrick Tse (謝賢) is exceptionally healthy at 83-years-old, and perhaps it is because he has Coco by his side. After he and his ex-wife Deborah Li (狄波拉) parted ways, Patrick met Shanghainese model Coco in 2005. Although he was 49 years older than her, they fell in love at first sight and dated for 12 years until 2017 when Patrick announced they broke up. However, the Hong Kong media recently caught Patrick and 34-year-old Coco on a date.

He generously treated his guests to a sumptuous dinner that included lobsters and champagne. Coco sat beside Patrick and constantly handed him food while occasionally chatting with the guests.

Patrick took the initiative and asked for the bill at around 10 p.m. Afterward, his driver took his friends and relatives back to their hotel before Patrick returned to his billion-dollar mansion with Coco for the night.

However, it is not the first time this year that the media photographed Coco going to Patrick’s house after they allegedly broke up. A few months ago, she took his car out to enjoy afternoon tea before returning to his mansion.