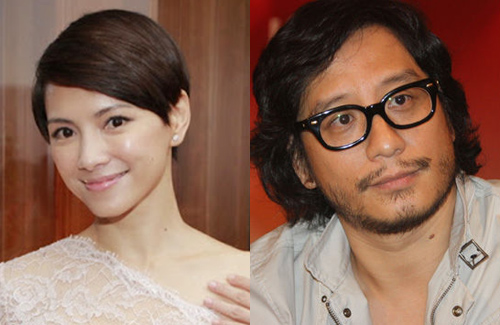 Oxide Pang (彭順) and Angelica Lee’s (李心潔) marriage has been scarred since the 48-year-old director was caught cheating on his wife with 26-year-old model, Liddy Li (李悅彤). Although Oxide issued an official apology and Angelica seemingly forgave him in their joint public statement, a close source revealed he is still unable to gain back his wife’s trust.

Two weeks ago, when Angelica checked into a hospital in Malaysia due to stomach acid pain, Oxide ignored his wife’s distress and busied himself with his cell phone instead. The couple had little interaction towards each other, apparently still trying to mend the broken shards of a marriage which was tested by Oxide’s infidelity. Although Angelica’s father was upset at Oxide for cheating twice in their relationship, the Lee family has forgiven Oxide for his mistakes.

In a sour mood, Oxide refused to answer questions regarding his current relationship with Angelica, suggesting the situation has not taken a positive turn. He only muttered they are on “okay” terms and “I want to cool down and calm myself.” Oxide emphasized he never provided Liddy with a sum of money after they were caught cheating, nor did he promise to divorce Angelica and marry Liddy, as reports indicated. Although he had a chat with his daughter in Malaysia, Oxide refused to share her opinions on his infidelity.

Currently, Oxide is in Beijing for a meeting and will head to Taiwan in August to shoot a new movie. The source added, “It’s a big problem that won’t be solved in just a few days. Oxide must work very hard to earn his wife’s trust again.”

Aside from suffering negative gossip as the third wheel in Oxide and Angelica’s relationship, Liddy is currently mourning the death of her father, Li Duk Yun (李德仁). After murdering his neighbor over a dispute, Li subsequently committed suicide by shooting himself in the mouth with a gun. Oxide shared that although he has heard about the terrifying news, he does not know of its details.

The close source spilled, “After the infidelity news surfaced, Oxide never saw Liddy again. It was even harder to find her after her father’s death. As a friend, Oxide is really worried about her. After all, she is only in her twenties and suffered such a big blow.”

42 comments to After Cheating, Oxide Pang Unable to Gain Back Angelica Lee’s Trust