Ali Lee, Fred Cheng On Working with Gallen Lo in “The Conspirators” 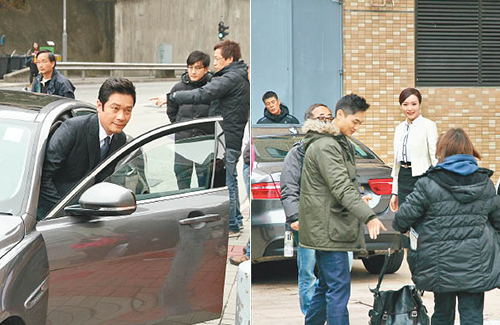 It’s a refreshing new team-up. Both Fred and Ali said they have never worked with Gallen before, and to be able to work so closely with the veteran actor is both exciting and nerve-wracking.

Their first few scenes with Gallen were quite shaky, but Fred and Ali quickly warmed up to the TV King. Ali said Gallen has a great sense of humor and would always find time to chat with her. Gallen’s easy-going and friendly personality has eased her nerves a lot. Fred, on the other hand, said he likes to stay in after hours to observe Gallen’s style of acting.

Portraying a mother with a five-year-old son, Ali’s role in The Conspirators is a stark contrast from her earlier TVB roles, which were mainly foxy and villainous. Ali said, “I am actually very happy to hear that people found my villainous roles memorable. As an actor, we should be able to become the character.”

On working with Ma Yiu-hin (馬耀軒), who plays her five-year-old son in the drama, Ali said, “He was pretty shy at first, but he warms up to you pretty fast, and when he does, he never stops talking. He’s very smart too!”

Fred plays Ringo, a spy who infiltrates Gallen’s business. In reality, he is actually Gallen’s long-lost son. Throughout the show, he engages in a battle of wits with Gallen, scheming to take him down.

It’s been well over a year since Fred last stepped in a film studio to shoot a drama. Ever since signing with Voice Entertainment and launching a singing career back in 2013, Fred hasn’t found the time to go back into acting. Stepping into The Conspirators, the 32-year-old said he’s happy to see familiar crew members again.

Professing that his love for acting never faded, Fred said he will maintain his focus on both acting and singing in the future.

5 comments to Ali Lee, Fred Cheng On Working with Gallen Lo in “The Conspirators”