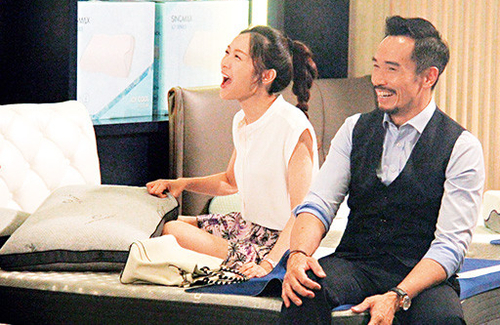 Earlier, TVB reportedly froze actress Ali Lee (李佳芯) due to her political views and stripped her of her leading roles in Who Wants a Baby 2 <BB來了2> and Legal Mavericks 2 <踩過界2>. Although the TV Queen denied she was frozen, it eventually became obvious as she later admitted that she had no dramas arranged for her. However, by the looks of her frequent appearances recently, it seems she’s finally “unfrozen” and is back to work on a new drama, Amelia’s Rhapsody <愛美麗狂想曲>, with co-star Moses Chan (陳豪).

For Amelia’s Rhapsody, she will be portraying a divorced secretary who has an ambiguous superior-subordinate relationship with Moses, who plays the boss of her PR company. In addition to filming for the new drama, TVB also arranged several jobs for the actress late last year, including participating in variety show Do Did Eat <Do姐有問題>, Yan Chai Charity Show <慈善星輝仁濟夜>, and presenting an award at the 2019 TVB Anniversary Awards. 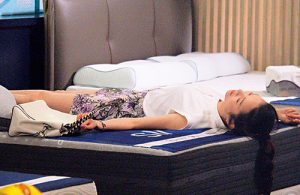 The job opportunities have put Ali in a good mood, as she was spotted displaying huge smiles while filming at a furniture store with Moses. Upon arriving at the store, Ali immediately laid on a huge bed to test its comfort level. Feeling relaxed, she soon fell asleep.

Moses only realized awhile later, and he attempted to wake her up by tapping her face, pressing her fingers and pulling her ponytail. Showing great friendship since this is their third time playing a couple, the two carried out their scenes with great ease and chemistry. It only took them about three or four takes to complete the scenes.