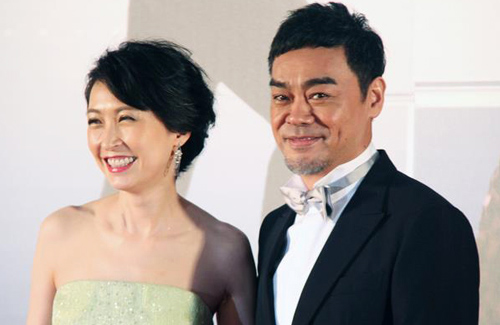 After Amy Kwok (郭藹明) married Sean Lau (劉青雲), she eventually retired from acting to focus on taking care of her household. Asked if she plans to film dramas again, Amy has doubts about her own abilities as she has been absent from television screens for many years.

“It’s been such a long time since I last acted…it must have been about 8 to 10 years. I don’t think I will be up to it.  I am worried that, for instance, I may not speak clearly before the camera.” Amy then added that TVB had not approached her with opportunities,” said Amy.

Ever since Amy appeared together with Sean in a recent advertisement, Amy seems to be making more promotional appearances. Amy laughed and said, “I have already been taking on promotional events before the advertisement was filmed.”

Asked if she wanted to work on a filming project with Sean, Amy responded, “That’s not very good, being too close and working together is not ideal…he may feel the need to constantly look after me.”Amy elaborated on why she did not think it would be a good arrangement, “We would be seeing each other both at work and outside work…we already have to give in to each other at home, imagine having to do that at work as well! We both have the same serious work ethic, and I especially do not like being disturbed while at work. He may unintentionally disturb me [while trying to look out for me]. This will upset both of us.”

Amy then addressed the rumor that she had given up a position with the National Aeronautics and Space Administration (NASA) in the United States in order to be with Sean. She said, “This is completely untrue and I have no idea how the rumor came about. I have interned before in the engineering industry, but it wasn’t with NASA. It was with a private aeronautical engineering company. I worked there for slightly over a year and it was before I met Sean, and before I entered the entertainment industry.” On why Amy chose to stay with Sean in Hong Kong rather than return to the United States for her engineering job, she explained, “After winning Miss Hong Kong in 1991, I had several jobs. And the company in the United States didn’t keep the position open just to wait for me.”

Recently at an event to promote kitchen equipment, Amy revealed that she frequently cooked at home and could make both Western-style and Chinese-style dishes. She said, “The only thing I try to avoid making is dessert, as Sean doesn’t really like sweets. I can make pasta, beef stew, and lemon chicken, etc.” On Sean’s favorite dish, Amy said, “He has a special preference for soup, so I will boil soup at least three to four times a week.”

As for Sean’s cooking, Amy said, “He would occasionally make noodles, and would sometimes make dumplings from scratch.”