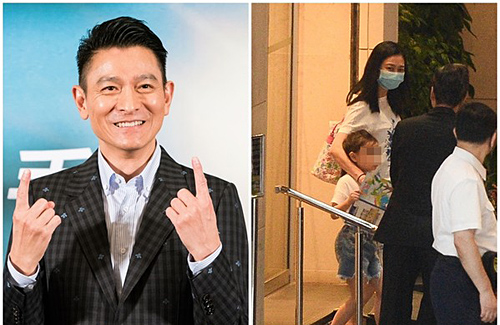 Despite his megastar status, Andy Lau (劉德華) is unafraid to show up at daughter, Hanna‘s (劉向蕙) school. When Andy had attended Hanna’s kindergarten graduation this June, he attracted a photo frenzy from the crowd. But surprisingly, Andy was able to bring Hanna to school today unnoticed.

After a family vacation in Prague, Andy is ready to dive back into work full-force. Promoting his upcoming 20-session concert series in Hong Kong, Andy was asked whether he had brought his daughter to school on the first day of school. Andy laughed, “I knew everyone would ask. That’s why I coaxed you here so my daughter won’t be bothered.” Admitting that he was at Hanna’s school earlier, Andy said, “Today, I was like Batman. No one recognized me at the school.”

Asked if Hanna will be attending one of his concert performances, Andy said he will ask if she wants to go. If Hanna does attend, Andy will make sure the highest security will be in place and she will not be spotted in the crowd.

Although the paparazzi managed to snap photos of Hanna once in a while, it was still rare to see Hanna’s face in the media. The published photos of Hanna are usually very blurry and taken from afar. Unlike Leon Lai (黎明) who shared a photo of his four-month-old daughter earlier on Instagram, Andy does not see himself doing so for privacy reasons, “I won’t do that; I’m not used to it.”