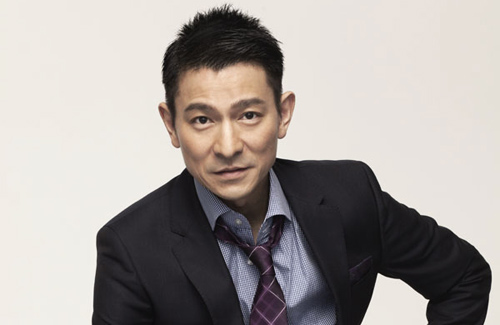 Since Andy Lau‘s (劉德華) daughter, Hanna Lau (劉向蕙), was born two years ago, it was expected that wife Carol Chu (朱麗倩) would soon follow up with a second pregnancy. Andy wishes to have a son and make the family complete. Since last year, the media has published frequent reports that Carol is expecting, often under the vaguest signs. Recently, Carol was photographed with a slight belly protrusion, which made many wonder if Andy will be a father again.

Wearing a face mask and loose white shirt, Carol was spotted heading to a Buddhist temple this week. She was accompanied by a bodyguard, who appeared to be carrying a bag of nutritional supplements, resembling pills that a pregnant woman would take to ensure healthy fetal development. Carol obviously gained weight in her mid-section, and reports claimed that she was at the temple to offer incense and express gratitude for becoming successfully pregnant again.

Andy has always cherished his family and became a doting father once Hanna was born. Asked when he would like to have a son to carry out the Lau family name, Andy had replied, “I really want to; I want it to happen soon too.”

However, Andy denied that Carol is currently pregnant. Regarding photo of Carol taken at the temple, Andy said simply, “She got fat, not pregnant.”

Carol reportedly had difficulty conceiving in her first pregnancy, and it may only grow harder for the 48-year-old Malaysian native as time goes by. At a concert performance in Taiwan, Andy admitted that he and Carol are trying for a second baby, but asked the public to not give them too much pressure. “If I’m successful, I’ll have an answer for you in three months.”

41 comments to Andy Lau Said Wife Got Fat, Not Pregnant