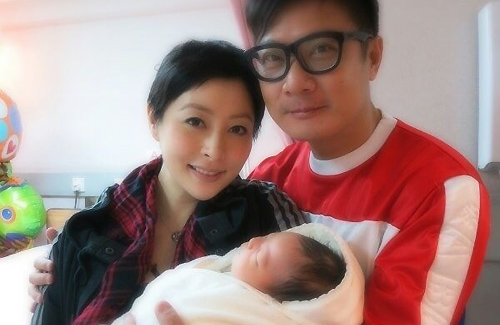 Congratulations to Angela Tong (湯盈盈) and hubby, Chin Ka Lok (錢嘉樂)! The couple welcomed the birth of their first born, daughter Alyssa Chin, on March 10 in the Canossa Hospital, Hong Kong. Ka Lok and Angela were seen leaving the Conossa Hospital in the early afternoon of March 12.

“[I am] very thankful. Being a father is actually a very blissful thing. Thank you everyone for your blessings!” posted Ka Lok on his Weibo.

The couple announced that Angela had already given birth to baby Alyssa on March 10, one week earlier than the delivery date. Alyssa weighed approximately 7 pounds and 3 ounces and is in excellent health. Angela revealed that her contractions started at around 6AM that morning. She also insisted to give birth naturally.

The nervous Ka Lok originally did not want to stay in the delivery room with Angela, but finally decided to witness their daughter’s birth. Angela joked that Ka Lok immediately took on his role as an action choreographer and attempted to calmly teach her how to breathe and push. Ka Lok then proceeded to cut her umbilical cord.

When Alyssa’s cries were heard, Ka Lok and Angela stared at their crying bundle with shock. It was Angela’s cries of happiness that snapped Ka Lok back into reality. He immediately burst into tears when he held Alyssa.

“My wife is crying like a fountain. I’m also like a mini fountain. I’m glad to be inside the delivery room. It’s a miracle that I’ll cherish. It’s amazing, incredible and wonderful!” Ka Lok said of her daughter’s birth.

Ka Lok continued excitedly, “I never thought Ka Lok Jai would become a father! Angela was great! She was able to walk so quickly!”

Alyssa has not been given a Chinese name yet, as Ka Lok’s father is still thinking over the final choices.

Many of the couple’s friends in the entertainment industry blessed Alyssa with gifts. Among their celebrity friends was Andy Lau (劉德華), who gave Alyssa many newborn baby products. The grateful couple will personally thank Andy and his family. Ka Lok joked that they did not need to go shopping anymore, saying, “We already have everything!”

Angela and Ka Lok will first prioritize their daughter and put aside work this year. The excited parents look forward to having a second child soon, with Ka Lok hoping to have a son next.